Christmas on the Gulf Coast of Texas

We arrived in Port Aransas, TX on a breezy, cold day.  Our path took us right through Corpus Christi, and as we passed the big plants and negotiated heavy traffic we worried that we'd made a huge mistake by committing to our site for a whole month. We were hoping for peace and quiet, tropical breezes and warm sticky days on the beach. Once we got on the East side of town we found the island and beaches we were looking for and breathed a sigh of relief that we hadn't inadvertently booked a spot downwind of a refinery for a month.

Every time we commit to a month somewhere some disaster happens.  We hoped to break our unlucky streak by picking a place that was already pre-disastered and this part of Texas was hit with Hurricane Harvey just a few months ago.  From the looks of it most of the island took heavy damage; the folks are working hard and fast to bring the homes, businesses and roads back up to snuff, the resulting cacophony of noise could hardly be called restful but at least it is productive and we are impressed with how quickly they are progressing.

About four days ago it finally stopped raining and warmed up. It's now in the 70's and breezy and a little sticky, I think this is more normal for here, and that we arrived during a strange cold spell for the region. We are right on the beach and the sand is super silky and fine and white, it's absolutely beautiful. The dog gets to run on the beach several times a day with one or both of us. The slightest breeze disturbs the sand on the surface and it makes the most beautiful designs on the beach. All in all it feels very tropical and we don't even care that we vacuum the sand out of the rig several times a day between Lance's boot and Chloe tracking it in. I leave my flipflops outside.

Last weekend I discovered the National Park at South Padre Island. The turtles that come ashore there to lay eggs are called Kemp ridley sea turtles and the females weigh in at around 125 lbs. I sure wish we could see one but they lay eggs in the Spring and they hatch in August so we missed them.
We have used the downtime and a solid mailing address to get some projects rolling.  The new office design has tested well this week so I will proceed with sanding, paint, and applying the fabric to the surface soon. We made friends with the maintenance crew here at the park and they offered us use of their workspace and their belt sander.  We ordered some new cushion guts for the settee chairs, and some parts to repair the blinds and curtains here and there. All of these are little things that go wrong with a 20-year old RV, I suppose, and still significantly less hassle than my house was on its best day.

We made reservations at a swanky fish restaurant with a view for Christmas Eve dinner, and we intend to graze through Christmas day here at the beach, Lance may slow cook a roast or maybe not.  We are learning the quirks of our convection oven and the metal plate my Mom bought us is turning out to be quite handy for one-dish meals. 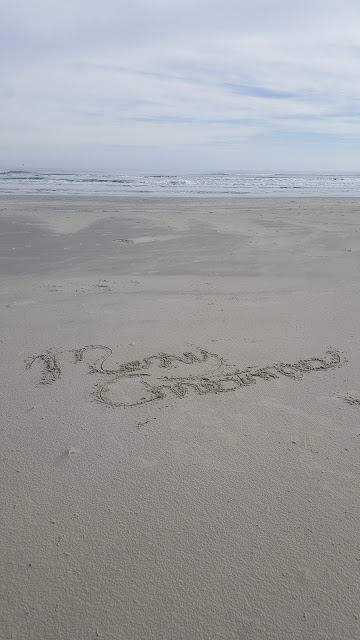 They allow beach driving here, probably not during turtle season though. Lance took the motorcycle out for a run down the beach the other day and came home with a huge grin, it inspired him to buy a drone camera with a Follow Me feature, so we will get some footage of both of us riding on the beach in the coming weeks, and maybe paddling on the Gulf ICW too if it arrives in time.

Folks around here are big birders.  They've got me hooked on looking for this one bird now called a rose spoon billed something or other. It is pink and sort of reminds me of a short fat flamingo, with a spoon-shaped bill it uses to stir up the water and filter feed. I look for it all along the waterline nowadays and am charging the Porta-Bote battery to go in search of one in the ICW soon. The water there is only 4 feet deep, shouldn't be a problem for the Porta Bote with its shallow draft, and the quiet electric motor should allow us to sneak in on the bird colonies undisturbed. Chloe in the bow is another story... she does love to bark at and chase birds. I got her a new lifevest with a solid handle on the top so the next time she falls off my paddleboard it will be easier to lift her back on.

We campaigned hard for a space on the Florida Keys for February but it looked like we weren't going to get in anywhere, snowbirds book FL a year or two in advance. We were well into laying out Plan B when we got a surprise call back from someone with a cancellation and we're in!  The problem is that it wasn't the schedule we wanted, so we'll be rushing from here to there and bypassing New Orleans and a lot of other cool stuff I really wanted to see/do. We have 1400+ miles to cover in 7 days, our preferred distance for a bus day is 200 miles so we won't be collecting any dust on the way down. All we could get secured there was 2 weeks so when they boot us out in early February we can meander back through the places I wanted to see at that time.  I expect it will pay to be flexible.

In the meantime, we are enjoying the Southern hospitality of Texas until mid-January. Folks are friendly and the weather is perfect, and it feels good to pump some money directly into the local economy while they rebuild.
Posted by Rhumb Line at 3:25 PM