Captain Wayne turned off the loud airboat motor and we slid to a smooth stop on top of the grasses and weeds. Although we were less than a mile from the gator village where we'd been holding the baby gators just a short time ago, it felt like a world away on the far side of the lake. We were out looking for the big gators among the brush. With the motor shut off we removed our earmuffs and the competing song of the bugs and birds came into focus.

"Yep, that there, that's where the eagles live" Captain Wayne pointed, "hey did you hear about the DNA findings in that local murder case?"

Hmmm. A rather odd way to start a conversation, apropos of nothing... "no..." we mumbled back at him, squinting into the brush for reptilian eyes or a glimpse of a large tail.

"Yeah, so this local house was robbed by the son's girlfriend and her friends and it was supposed to be vacant. But when they got there and got to robbin' they discovered construction crew down in the basement doin' their thing. So they did what they had to do and killed them all. And they would have got away with it except one of the robbers stepped in dog shit and the police managed to link the trace discovered in his tennis shoe tread back to the family dog. And the moral of that story is... if you're out robbin' and killin' be sure you don't step in shit. That DNA'll get ya every time."

REALLY Captain Wayne? THAT'S the moral of that story?

I was suddenly feeling quite vulnerable among the weeds, crickets, and thus far invisible eagles. The silence from the other airboat passengers confirmed uncomfortableness all around. Someone coughed, someone else cleared their throat. After a few mostly silent moments Captain Wayne fired up the airboat, we donned our earmuffs, and we were back on our way to search for large gators.

OK Captain Wayne. I thought I had met the best of the campfire story tellers. You are officially their king.

We roll back to Cummins Orlando on Friday to reunite Loretta with her generator. It turns out the propane regulator just needed a deep cleaning.

Posted by Rhumb Line at 4:29 PM No comments:

Gulf Shores, Alabama is a resort town on the water, bordered on the South by beautiful white sand beaches along the Gulf, and split in half by the Intra-Coastal Waterway (ICW). Their motto is "small town big beach" which pretty much sums it up. It was the perfect place to hang with friends in the evenings, and get significant piles of year-end bookkeeping work done during the daytime.

We are also taking a moment here to lick our boat shopping wounds, it's taking more of a soul toll than expected.

Anyhoo... back to Gulf Shores, our January landing spot. Snowbirds are welcomed here. Most of them come from Michigan, Minnesota, Wisconsin and Indiana, with a few Canadians sprinkled in.


There's $1 minigolf, live music every night, oysters, and hot wings. I've been told it's off the hook for Spring break. Plans are already under way for assorted Mardi Gras celebrations around town, people have started decorating floats and selecting colorful costumes.


We exchanged our Florida flip-flop and swimsuit attire for boots and hoodies and embraced the bug-free cooler weather. The January storms that rolled across us were plentiful, windy and wet - during one particular storm we were grateful to be living in a heavy Class A, and I felt compelled to place the Mini between us and a nearby lightweight popup camper I was worried about blowing into us. Finding a body shop for the Mini is less hassle than settling Loretta into one. It seems the normal January weather pattern for this region is one day in the low 60's followed by a day or two of very wet and sometimes thundering storms. The snowbirds didn't seem to mind - their people were all shoveling snow at home after all, but it was a shock to us coming from the Keys so recently.


You may remember Gulf Shores from the news in 2010 - it was hit with a huge oil spill that affected the town in many significant ways. As part of the cleanup and restoration process, BP funded several improvement projects, my favorite of which is the 60 miles of bicycle paths through the wetland preserve, easily accessible from our campground. Lance rode nearly daily while I worked, I joined him whenever I could escape my desk.

And Loretta got some lovin' - a new coat of wax! We were thrilled to find someone affordable to take on the job.

No trip to the area is complete without a tour of nearby Fort Pickens This fort was build in 1834 and saw action in the civil war and also protected against German submarines in World War II. Today only a few of the monstrously huge cannons remain on the beach, standing vigil among the lizards and seabirds. 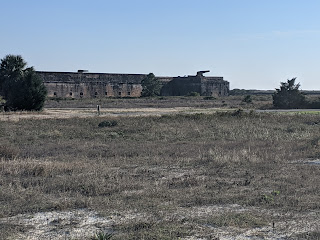 Another great find was Joe Patti's Seafood, which has fish covered from catch to market to restaurant.


.
We were invited here by friends we met a couple of years ago in Mexico Beach, FL. We were there because friends we made in the Keys invited us to follow them there when we all left the Keys together. We were in the Keys because friends we made in Brookings OR in our first few months on the road recommended we join the Elks and the Elks hooked us up. So it definitely pays to make friends on the road. It's easy - just take a lap around the park with the dog. Or open your lawn chair and sit down in front of your rig. Or open a hatch on your rig and look puzzled - I guarantee you'll get more help than you may need.

This park in Gulf Shores has a core group of snowbirds that return year after year. Their travel is different from ours in that they pretty much live in Wisconsin, Michigan or Minnesota half the year and live here at the park the other half of the year - their rigs travel only back and forth or just stay here and await their return. Classic snowbird behavior but so foreign to us. I can definitely see the allure in rejoining friends year after year. They welcomed us into their events, of which there were many ranging from a superbowl party to weekly mini-golf and bean-bag toss games (out here they call the game corn hole - the idea is to throw a bean bag into a box with a hole in it).

While we are still enjoying our life of travel, I find that the goodbyes are wearing on me. But it won't stop me from continuing to make new friends along the way, that is the point of all of this after all. Maybe a snowbird life is in my future - when I can enjoy good weather and look forward to seeing the same friends next year, making the goodbyes a little easier.

After the next adventure, maybe...