It's been two years since we bought Loretta, our 1996 Tiffin Allegro Bus. She's a 34 ft diesel pusher on an Oshkosh chassis with a Cummins 5.9 liter turbo diesel and an Allison 6 speed transmission. When we bought her we bought new tires (Michelin XRVs), installed a tire pressure monitoring system, new shocks (Konis), did a front-end alignment with new kingpins and bushings, engine oil change, had the leveling jacks rebuilt with a new control board and a return spring, new fusible link on the water heater, replaced the starting battery, replaced all the lift struts on the basement compartments, and replaced the water pump. On our second day of full-timing we broke a piece of the throttle linkage. What followed was a year of absolutely no problems aside from a broken connector on the leveling jacks and some bad connections on the generator. Since October of last year we have:

If you are thinking about full-timing in a bus this is an idea of what to expect. Not to mention carpet and upholstery cleaning, washing, waxing care and maintenance of your towed vehicle, and other incidentals. We're lucky to be able to do much of the work ourselves. Keep in mind no matter how handy you are, there aren't many RV parks that are happy with you working on your rig onsite. It's even hard to find one that will let you wash your rig much less change your oil. We keep about 10k in our repair kitty for contingencies and we've probably spent twice that on repairs. That being said I won't be trading what I have for a house any time soon. This is a unique and rewarding lifestyle that gives me perspective on how people around the country live. When I see news from around the country I can relate, having been to some of the places they are talking about. As always, I'm enjoying where I am and looking forward to the next stop.

A Toad is Born

It seemed so simple - get a car and make into a toad.
We decided on a Mini Cooper, they're all over the internet, and are flat-towable.

We picked the best one we could find on Craigslist, looked it over carefully, and a fistful of cash later we brought it back to the RV park. The tires were brand new (a big selling point) and other than a few minor cosmetic scuffs we were good to go. It had just passed smog, we had a copy of the certificate.

First, check and change all the fluids. Come to find out the oil plug was stripped. Repair that.

Second, register the car to us. They won't accept the smog pass from last month, we must get a new smog certificate. Ugh California whatareyagonnado. Done.

Third, the car only came with one key and the fob wasn't working.  Come to find out it's not a simple replace-the-fob-battery thing, it requires a whole new key to be ordered from the factory. Oh well, probably a good idea to have a second one on hand anyways, especially since a key needs to remain in the ignition while being flat-towed. Ordered that.

Fourth, the tow package needs to be installed.  After much discussion, research and shopping we settled on a Blue Ox tow system. Ordered that.

We arrived at Dad's house to install the tow package.  He had all the tools laid out like a pit stop.  We pulled in and thought to ourselves "perfect - this will go super quickly and then we can hang out with family". Lance and Dad and had the front fascia off the car in minutes... only to discover that the support holding the radiator in place was broken. At some point the car must have hit a curb or perhaps a small speed bump and broke this important part. This is a common problem with these little cars because they're so low to the ground - it's a miracle the radiator hadn't fallen right out and taken the air conditioning unit with it. Why BMW chose to make this critical part out of plastic mystifies us. Especially since it's so exposed.

While we were standing around cursing our misfortune I kicked the tire and then discover a giant wart on the outside of the front driver's side tire. (Whaaaat!!!!???), further inspection revealed a gash in the back passenger's side tire too, only visible when viewed from an inch away but easily peeled back to a scary depth.

I quit. Time for a beer.
This was clearly beyond us. Enter the family mechanic.

The findings on the tires were what we expected - new but still faulty, best to replace all 4 (my first experience with Continental Tires is not going well). Repairing the radiator support bracket meant removing/replacing the toxic radiator and air conditioning fluids - a tedious hazmat job - and since he was there we asked him to just finish up by attaching the d^#& tow bracket so we could just move on with our original plan. I once heard a sailor say "success! I got the project before the project done so now I can finally get to the project." yep, that's about right.

Well, freedom isn't free, nothing worth having comes easy and all that. So here we are.

Loretta's got some haphazard brake lights/tail lights which are also being addressed, then we'll be good to hit the road again.

Eureka is having a Salt & Fog Fish Fest on the 24th and it's a manageable goal so we aim to be rolling there in 3 weeks. Surgery #13 will be behind us by then, the toad will be attached and all lights will be functional, one family of 5 back on the road with one driver.

Which reminds me... the new toad has a name.
Taken from my favorite childhood book A Wind in the Willows, a wild and impetuous character who loves to drive fast and live carefree.

Welcome to the family
Mr. Toad. 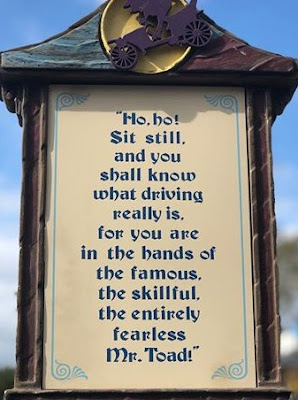