They're pretty proud of that 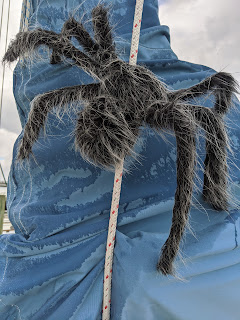 Chloe was wearing her pirate costume. Minerva was flying her NC Sail pirate flag. Lance's new stuffed shoulder parrot and our pirate costumes waited in a salon locker for the evening's festivities. Two fresh bundles of firewood sat wrapped in plastic on the deck. The rum pantry and groceries were stocked. We crossed our fingers and put Minerva in reverse. She smoothly backed away from her slip, and we were off to the fuel dock. So far so good. 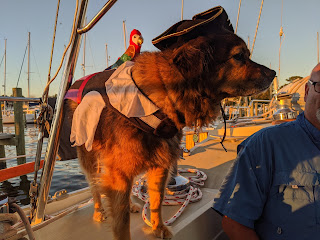 We pulled into the fuel dock and topped off the diesel. Minerva leaned a little to her starboard side with the newly full tank. So far so good.

We slipped the lines and backed out of the fuel dock. Lance took her out of reverse and put her in forward and we were off to a fun destination. Finally.

Then forward motion slowed. Lance revved the throttle - we should have been doing 6 knots forward but were just drifting along with the wind and inertia from the initial thrust. Fortunately the wind was at our backs so we drifted slowly past the anchored boats and sailed her back into her slip. Upon further investigation it was discovered that the shaft was not turning with any real intent, even with the engine revs up Lance could stop the propeller shaft from spinning by gently touching it with his shoe, or (as later discovered) his hand and a gentle grip.

Our friends had gone ahead of us for the pirate festivities, and were either making way there or were already settled in Beaufort for a night of pirate partying. Without extra hands to catch us it's good we have had so much practice at landing her in the slip without power. Of the last five times out, we were towed in twice and sailed her in ourselves the other three.

Well, at least we have a plentiful supply of rum. Day drinking anyone? This boat is going to turn me into an alcoholic. Seriously.

The mechanic confirmed our suspicion. The transmission really is toast. We thought we had saved it; it can't be saved. When Lance's eyes widened at the quoted price for the replacement transmission the mechanic said "yeah, they're pretty proud of that", which has become our new mantra for all boat repair parts. The new transmission (thankfully one does actually exist) is on its way, we have an installation date on the calendar for end of October, and there's not much we can do but wait for it. Seems like a good opportunity to pull forward little projects from the Tier 3 list while we wait.

The good news is that the weather is finally cooler. Which means the air conditioner parts are finally on their way as well after being on backorder since June. We will have integrated air conditioning installed in November, and next summer will be a lot more comfortable.
While we are disappointed we couldn't do the grand NorthEast tour we had planned this hurricane season, we are appreciating the cooler weather and the bonus time spent with friends. The Tier 3 To Do list is mostly comprised of comfort items which we didn't think we'd be getting to this year, and ticking each of them off means we are more at home on our boat.

Oriental and nearby New Bern are significantly socially active towns ordinarily. It took everyone a beat to figure out how to translate the usual frequent community events into socially distant and safe events, but we're getting there. Oriental's annual Pirate Jam ultimately was staged on Teaches Point which is surrounded on 3 sides by water. The music still went on, the difference was the fans listened from boats, kayaks, and dinghies. The fans let the musicians know their appreciation with boat bells and fog horns.  Turning in $100 of receipts from local stores and restaurants earned us a Pirate Jam flag, a creative way of supporting the event sponsors since charging ticket prices wasn't feasible on the open water.

New Bern's MumFest continued with the restaurants spilled out onto the streets into roped off tables spaced 6' apart, staff wore masks to deliver the food and surely put some extra miles on their tennis shoes. Oriental's Front Porch Music Festival continued largely as usual, the fans brought their own chairs and set them up in family clusters, leaving space apart from other clusters, and enthusiastically sang along with the musicians. It feels good to get off our dock and (sort of) mingle with the locals, we simply keep our masks on, keep our distance, deploy frequent hand sanitizer and avoid any situations that are crowded. Hopefully we'll all get a safe vaccination soon, if not these are simple procedures to follow and we are feeling more and more like we can adhere to the new normal and move around the nation safely this way in the meantime.
Posted by Rhumb Line at 2:18 PM 2 comments:

"I ain't never seen nothin' like it" said the weekend boater, standing on the deck of the fishing boat he had chartered, his hat on backwards. "She started shrieking at him, and the next thing I knew she'd tackled him to the ground and I had to join with 3 of my buddies to pull her off before she shoved his hat down all the way down his throat. What's the world comin' to when a guy can't offer up advice to a local woman without her freaking out? Sailor bitch be cray-cray!"

Another witness, who looks significantly like Sam Elliot, crushed his cigarette in the ashtray outside The Bean coffee shop and tsked. "Damn weekend boat renters ought to know better than to come off with a comment like that. He's lucky every boat owner here didn't toss his lifeless body in the dragon moat." The Sam Elliot look-alike went on to say that when he came to Oriental North Carolina and saw his dream boat in someone's backyard, it was a siren call that wouldn't be denied. That was 16 years go. "She'll be ready to sail soon, I think, maybe next year" and took another sip of his coffee.

Reportedly the woman sailor and her husband have been working on the sailboat they purchased 6 months ago non-stop; it has caused them great strife and little joy. She was commiserating with other boat owners at the local coffee shop when the outsider barged into the conversation, uninvited, and delivered his line.

The phrase that caused the otherwise calm sailor woman to come completely unhinged? That is a source of disagreement among witnesses. It could have been any of the standard issue comments "you know what boat means: Break Out Another Thousand", "that's boats for ya", "need some help with that little Missy", or "that's boat ownership, fixin' 'er up in exotic locations". While the local boat owners couldn't agree on the actual phrase that set her off, they did agree on one thing.

"It was the overly familiar tone with which he made his unoriginal and unwelcome announcement, followed by the knowing wink that did it."

When last seen the sailor woman was stomping off towards the marina muttering to herself and clutching her dragon coffee cup.

Posted by Rhumb Line at 7:59 AM No comments: