I'll clean it if you buy it. 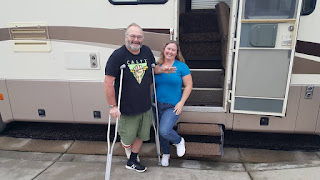 RV shopping.  When we devised our plan to travel around North America we put in place a budget, basically the proceeds of the sale of Sea Monkey, Craigslist stuff, and our 350z would be what we used to buy our coach. When everything was said and done we had a little more than 26k. Oh silly me, to think I can find something decent for that. Looking at Craig's list and RVtrader I could see around a dozen or so coaches that met our criteria. Apparently everything we can afford lives in the I.E. (inland empire) no small distance from our house in some godawful traffic.

Here is what I learned about used RV shopping.  If the owner starts a sentence with the phrase "me and my buddies camping in the desert" the carpet will be covered in unidentifiable stains and it will smell vaguely of piss and Coors Light. If it is thousands below book value the owner bought it at auction, put a thin coat of lipstick on that pig and will try to shove it down your throat. If you point out some obvious flaws he will become sullen and send you a bunch of crazy and insulting texts. (Enzo, next time try saying that shit to my face you coward)  Then there was the guy who would gladly clean the coach if we bought it. Nice try.  I was at the point of despair. Do we need to finance something to get a decent coach? The whole point of this is to be debt-free, and everything we finance now will be paid of at the sale of our house. Less cash for us. There was one bright spot. The first RV we looked at was spotless, diesel, and within our budget. We didn't make an offer for three reasons. One, it was the first thing we looked at. Two, it was over twenty years old. Three, it was listed right at the far end of our budget, any modifications would put us over. We looked over our priorities and decided that condition is more important than age. We didn't have to pay his asking price, it couldn't hurt to make him an offer.  Everything else we looked at was faded, stained or smelled like the dumpster behind Goodwill. So off we go on another 80 mile round trip to Fontana. Turns out he accepted our offer, and for a little extra he agreed to deliver our new coach to us. Arriving Sunday: our 1996 Allegro Bus, pictures coming soon.
Posted by Rhumb Line at 9:40 AM No comments:

Craigslist RV shopping - the Good, the Bad, and the Seriously Ugly

We started getting serious about RV shopping this week, and cash in hand and expectations high, set out on a series of viewing appointments yesterday.

Lance is still wearing a cast so I'm doing all of the driving and all of the roof-top scrabbling and hopping around. We put about 350 miles on yesterday between the three appointments.

The first one was in the high desert - 130 miles from our home. It was a stretch for us as it was at the top of our budget, leaving no room at all for improvements, repairs or upgrades. And it was in excellent shape, having been owned most recently by a very meticulous diesel mechanic. But it was almost 20 years old and almost 5 feet longer than we wanted.

The second one was in a different part of the high desert, also quite far away. We really liked the layout and the price was right, but quickly discovered the photos hid a lot of the faults. Outside the stickers were peeling and the poor thing hadn't seen a coat of wax in years. Inside there was grime an inch thick on every interior surface, on every doorknob, in every drawer amongst their piles of personal crap which they hadn't even bothered to remove.  And, I kid you not, crusty pee in the carpet all around the toilet. I ran out of it retching. At least the seller was a nice guy, for a gross pig. We fled that scene rather quickly, and it took me a while to get my stomach under control again.

The third one was very clean and empty, but the dude showing it to us was quite squirrely.  He made it clear he didn't want to take it out of storage to show it to any "tire kickers".  We assured him we were serious buyers and finally persuaded him to show us the RV. Something felt off about it immediately and the more I opened cabinets, lifted the mattress, and generally inspected the nooks and crannies he more sullen he became.  I discovered the "new" mattress didn't fit properly, and it was in fact oversized to look good to the casual observer but there wasn't any actual support underneath of the outer 12" or so, and it also blocked the bedroom cabinets from opening. It was probably placed there to replace the factory one which was likely water-stained from a leaky window and roof, which I went looking for after I figured out what the mattress deceit was all about.  The swivel chair behind the passenger chair hid a series of cobbled together pieces of carpet and a hole in the floor with some bulky mis-matched bolts, probably meant to hold on the original swivel seat, and this cheap after-market chair was not bolted down and surely would have attacked me on the first abrupt stop. The passenger window had a huge crack in it from top to bottom (window damage was not mentioned on the ad and cleverly not visible in any of the sales pictures). This visit ended up with us thanking him politely for his time and walking away, later he followed up with a series of very nasty text messages about how we wasted his time, each one more ridiculous  and curse-filled than the last.

The fourth one was on the edge of outer space - we drove another hour and a half to see it and although the bones were good and the owner a reasonable guy it was just obviously worn out.  The stains on the ceiling and the buckled area on the floor tell the story of leaks in previous years and although the roof repairs appear to be holding solid for now, those stains were rather eye-catching, one piece of many in the evidence of an RV ready to retire permanently.

I know Lance is getting frustrated, this is the one he came up with this morning and has been pitching hard. Fortunately it's all the way out in Vegas so we aren't going to see it... if it was closer I just might find myself living in a Mack truck. 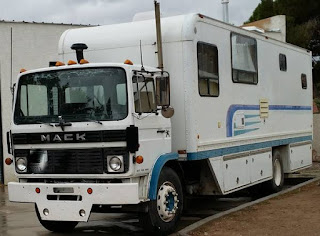 We may have to adjust our expectations.
Posted by Rhumb Line at 2:04 PM No comments:

Almost every time I mention that I am a boat owner I hear the same joke. You know the one... "You know what the best two days of a boat owners life are? The day you buy it, and the day you sell it." Usually delivered with a knowing smile, by someone who doesn't know shit about boats. I can only guess their experience is either none, or maybe they actually owned a boat that rotted in their driveway until it became the neighborhood eyesore.

I didn't buy a boat because I went to the river once and thought it was "cool". I didn't buy a boat to keep up with the Joneses. I bought a boat because I am drawn to the ocean, and selling the Sea Monkey broke my heart. Boats are expensive, require a lot of attention to keep in good shape, but in the end they provide you with a life filled with amazing experiences. We have sailed among blue, gray, and sperm whales. Dolphins so numerous they were impossible to count. Sea lions playing in our bow wake as we tried to take pictures of them. Next month on the cover of Good Old Boat magazine will be a photo of the lighthouse at Angel's Gate taken while returning from Two Harbors on Catalina. This will be the last memory of our Sea Monkey. I mentioned when we started this blog that Shawna and I are at our best when we are on the ocean. We are at peace, each of us knowing what is expected of us and competent to do it. The quiet gurgle of the boat as we sail is our soundtrack. So if you are inclined to tell that joke all I can say is make sure you know your audience, because I might punch you in the face. That being said I have never seen my wife so close the violence as when the potential buyer threw out a ridiculous low-ball offer. The buyer's wife must have noticed Shawna getting ready to chuck both of them off the boat, and quickly responded with a reasonable offer. After a rather rough start they turned out to be a nice couple, and should be good custodians of Sea Monkey. The money we earned from the sale will allow us to pursue the next phase of our journey.

Posted by Rhumb Line at 1:08 PM No comments:

The Sea Monkey goes on the market. Adulting sucks.

Sometimes you just gotta put your head down and plow through the things you don't want to do. Such is the case with being an adult.

So I carried the clean cushions back down to the boat, did some last-minute teak oil touch up on the interior, took out the good camera, and captured every angle in the afternoon sunlight.

Tonight our beloved Sea Monkey goes on the market. Of all the things we are letting go, this one is gonna really hurt. I love this little sailboat.

God help the poor soul who wants to dicker with me. 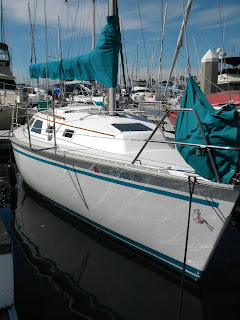 Posted by Rhumb Line at 3:34 PM No comments: