Sometimes the eagle gets in the way of your shot

We pushed off the Oregon coast for a moment for a quick run into Portland.

Portland was quirky, and quite intense; in four short days we managed to check out a boat (not the one for us), pick up a pair of bicycles (doctor's orders... hoping to restore some balance and flexibility to Lance's foot), and visit some friends, then we fled the busy scene for the quiet coast again. The plan was to make some short hops along the Washington Coast.

First stop: Hoquiam. It turned out to be less interesting than the map suggested so we just stayed the one night and moved on.

Second stop: Forks and La Push. The folks of Forks really made us feel right at home - they were so friendly and welcoming - and they even sent us off with a huge slab of halibut which required significant Tetris skills to fit in the freezer (we'll be looking for friends to share a large fish meal with somewhere not too far down the road, it's way too much for the two of us).

The nearby Quileute Reservation surrounds the town of La Push and beaches with such original names as First Beach, Second Beach and... you guessed it... Third Beach. The beaches are littered with absolutely huge trees; sunbleached, aged and weathered.


At first I thought they'd washed up years ago in big storms, or that they'd been cut down and sent down the river, and then escaped before making it to their final processing destination. But these trees still have their roots, so this is not the work of lumberjacks. After careful consideration, I believe there's another force at work here.

The greens of Washington are all-consuming - there are shades of green here I didn't even know existed. Mother Nature refuses to yield even a square inch to any bare earth, the greenery even grows right down to the water line. I believe that the trees grew as close to the ocean as they could, only to eventually submit to saltwater intrusion, die and fall over onto the beach. And then they get pushed around by high tides and storms, creating these amazing huge bleached driftwood piles. Here's another shot down below, as you can see the trees on the front line are about to join their brethren on the beach. Regardless whether green, dying, or bleached and weather-worn, the trees on the beaches of La Push are beautiful.

Third stop: Sequim (pronounced squim). It was purely coincidence that we arrived just in time for the lavender festival. We settled in at the same time the tents went up, crowds started arriving, and people rejoiced in all things lavender. Citizens adorned homes and businesses in festive lavender flags and everyone was wearing purple. Except us. Apparently we have no purple whatsoever on the bus. So we were the dorks in black and brown. Oh well.

I had my heart set on a shot of lavender in the late afternoon sunlight, and took off across the countryside to find the picture I had in mind. I was just circling in on my chosen location, admiring the frantic bee activity and waiting out the lighting of my intended shot when I came across a dozen or so people with long-lens cameras on the roadside. When I looked up from the fields of lavender for a moment I discovered the source of their rapt attention - a nest with a baby bald eagle who would come out and stretch his wings now and then. The young one was chittering at his/her parents who would circle around and then fly off again; eagle babies make a sound quite similar to the high-pitched and random squeak of sneakers on a hardwood basketball court. This one was all shades of brown, apparently they don't grow into their white heads for several years.

While I was busy gawking at eagles, the afternoon light nearly got away from me. I had to tear myself away. In the end I got the lavender shots and Lance got the eagle shots (we'll put them all on Shutterstock soon). Chloe got to ride in the car and frolic on the beach. It was a good day.

Oregon Chill in the Land of Cheese

The folks in Oregon are so chill.
Today we sat through at least two minutes at a green light, three cars back, and nobody honked. And the chill must be rubbing off on me too because although I wondered what was going on I also did not honk. How uncharacteristic of me. Definitely a different plane of existence than I used to live on.

This week we explored Tillamook, Oregon.  Land of cheeeeeeeeese. Yes we both love cheese and this stop has been on my radar for quite some time.

We were so deep into our Oregon Chill that we were caught completely unprepared for the tourist insanity at the Tillamook Creamery visitor center. We heard the hamburgers were not to be missed - so I waited in line for 30 minutes to order our food, and then we waited for it to arrive another 45 minutes or so. The hamburgers were mediocre - definitely not worthy of the wait. The cheese tasting - well, it's the same awesome cheese you can buy at the grocery store - had I known that I would have skipped that line too. But the ice cream... oh my. The line was long but moved really quickly and was totally worth the wait. Many of the flavors served there are experimental or for some other reason not sold to the grocery store chains, so you can only get them there - don't miss this stop if you come by. There is RV parking but at midday it was filled with cars and there wasn't any staff to stop the car drivers from doing that, when we left at 4:00 there was room available for some rigs in that area of the lot. If you're coming in your RV get here early in the day (like dawn) or late in the afternoon and there should be parking for you. At midday forgetaboutit. 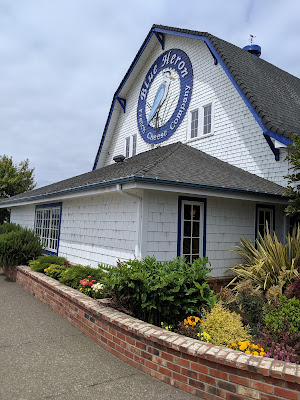 Just down the street was the Blue Heron French Cheese company, and they also had a tasting for cheese, but they additionally had tastings for wine, mustards, and locals' dips. We bought some blue cheese dressing that is out of this world. No lines, no waiting, and the lunch there was fabulous. They even had charging stations for electric vehicles - how forward thinking of them.


Of the two cheese factories the Blue Heron was hands-down my favorite. And it's a Harvest Host location, too, so if we come back this way we'll do the wine tasting and stay the night on their farm.


At both places dogs were welcome on the outside patios.

We also checked out an old blimp hangar from the 40's clearly visible from the highway; in fact it's probably clearly visible from space. This old half-dome wooden structure was built to house up to 6 blimps, which starting arriving before construction was complete and were pressed into immediate service spotting Japanese submarines and otherwise escorting our West Coast warships in their World War II duties. 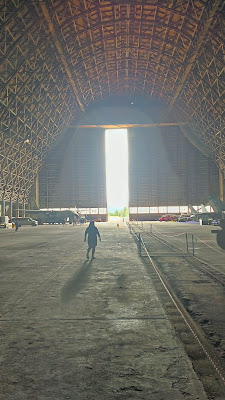 We roll on for Portland next, to be followed by a tour through Washington state.

Posted by Rhumb Line at 7:33 AM No comments:

Lance called me from the bar at the water's edge. He'd taken the dog for a short walk along the marina in Newport OR, but of course his real agenda was to eyeball the boats; there are some Tayanas here in various stages of disrepair.

When they were on their way back to the car the dog took a hard right turn at the Rogue Distillery and practically dragged him in, drank deep from a bowl of water and flopped down on the cool concrete making it clear she was staying for a while. The chemist behind the bar is a true-blue animal lover who worked with sea otters at the aquarium in Atlanta, and now splits her time between working for Rogue and working with the birds at the local aquarium; when the conversation turned to training sea otters Lance called me to join them. We had so many sea otter encounters in Monterey Bay from our years of teaching scuba in California. The stories flowed freely.

A short while later another couple came in and joined the conversation. This beach town is their favorite weekend getaway and they've been coming here for years, with all that local knowledge they had some definite opinions on the meals and sights not to miss.

Before long the conversation turned to dinner and out of the blue the wife invited us to join them at their favorite swanky spot on the beach. The husband's face drained of all color and I felt Lance stiffen beside me, but I chose to ignore both men and accepted her invitation anyways.

We showed up at the agreed-upon time, had a fabulous meal and made some interesting new friends. The hours between the distillery and the restaurant though... the discussions went from "what if they're into something weird" to "let's just cancel". In the end we decided that we could always simply flee at the first sign of any conversation involving timeshares, Amway, or cult religion.

Which brings me to one of the most commonly asked questions about our lifestyle "aren't you afraid?" often followed by "aren't you lonely?" Seriously, people ask us this all the time. Contrary to what the news would have us believe, we've found that people are basically good. We've found that when we are open and friendly that energy comes back to us in equal or greater amounts. We've made lifelong friends by just saying yes to casual invites like this as we move around the country.

That doesn't mean we don't occasionally feel the need to lock all the basement doors, stay within sight of the bus when walking the dog, and wrestle Stewie to stay inside here and there when we get a case of the heebie-jeebies, and we listen to that intuition when either of us feels it. That's just being vigilant and responding appropriately to our surroundings.

And there are definitely some conversations we avoid or redirect when we know our values are different from the locals'.

However, when I look back on the places we've visited in the last almost two years of full-timing, the places where we've felt unwelcome are very few, and in every case in those places WE didn't make an effort to get out and be friendly because of bad weather, mechanical or medical issues we were dealing with internally. Our attitude in those moments was most definitely a contributing factor.

So here's our tip for making friends on the fly: just say yes. You  might find yourself kayaking along a beautiful river, telling stories over dinner, learning a new favorite cocktail recipe, sharing a fabulous sunset together, flying in the neighbor's plane, screaming your way through a scary Halloween maze, cheering on a game with some true fans, or grooving to the local music scene. Just say yes and go.