After leaving Bellhaven we cruised the Alligator River, encountered our first swing bridge, and pushed on across a stormy Albemarle to tie up safe and exhausted at the Coinjock Marina. We decided to stay there for a couple of days to recover, enjoy their famous prime rib, and then motored on through the beautiful marshlands to the free docks at the Great Bridge.

At Great Bridge we were treated to a quiet and peaceful park perfect for long dog walks along the river, and giggled at the honking geese expending great effort to keep all their young together as they clumsily learned to negotiate the river banks and swim. 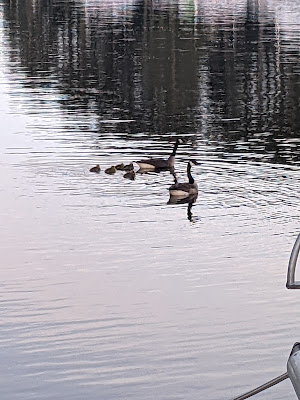 We were going to just stay the one night, but dark clouds rolled in so we decided to stay an extra day, and used our rainy downtime day to visit the Great Bridge Museum. 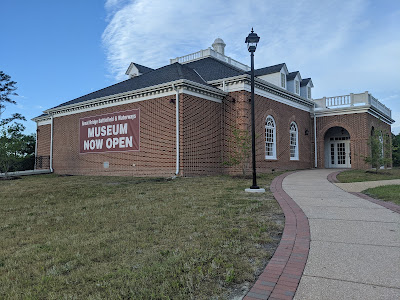 The Great Bridge is historically significant because it was the site of a great Revolutionary War battle in which the spunky and wily settlers conquered the mighty British Army, despite being outnumbered and significantly outgunned. The last villager to retreat off the bridge was Billy Flora, who bravely pulled the wooden planks off the bridge behind himself to further slow the British advance. By maintaining control of this bridge, the colonists denied British reinforcements that might have turned the tables on other other important battles in the region as well.
While we were resting here we met cruisers from Camden Maine who were on their way home after an extended trip through the Bahamas. This part of the ICW is part of their annual route, and so they suggested we follow them through our first lock and the craziness of Norfolk VA the next day.
Passing beyond the Great Lock signifies the end of the wind-driven tides and the beginning of the lunar tides, which are much more predictable. And finally some deeper water.

We scurried to get out of the way of a fuel tanker that surprised us around one bend, its two tugs pushing and pulling it into place for fuel off-loading. We waited for quite a long time at a railroad bridge so long trains of cargo and fuel could go by, Minerva dancing in circles to keep her place in line despite the current and the wind.

Norfolk has a military base and also a ship-building yard and there were several military and cargo vessels in various stages of build-out. After so much time in the quiet little village of Oriental and the timeless travel in the tranquil marshland beauty of the ICW, Norfolk was an assault on the senses; between the industrial smells and the cacophony of normal city life and the banging and clanking of the shipyards it was totally overwhelming. We set the hook at an approved anchorage just off of Hospital Point and were surrounded by city lights and noises and absolutely huge vessels moving around. The next morning I paddled Chloe to the tiniest snippet of beach in front of the hospital where we were greeted with big "no trespassing" signs... too late the dog was already off the SUP and frolicking on the sand. We paddled immediately back to Minerva and took off to Yorktown.
The marina parked us alongside a day cruise commercial sailboat, we didn't know it at the time but it turned out to be the very same boat that sparked a dream of sailing for our friend Emily, who is now a liveaboard boat owner too.

Yorktown also has significant revolutionary war history. Once upon a time it was the place through which all colonist-made products were routed for tax purposes, the primary export for this region being tobacco, making it ground zero for the boiling resentment between the colonists and the British who established a Navy presence there to try to keep a lid on it. The subsequent battle here was won by George Washington and French allies, and visible holes remain on the hillside from the cannon and musket fire all those years ago.
The day we left Yorktown we crossed the wake of the original Jamestown settlers, one of my bucket list items, and we were out in the Chesapeake. And, alas, still no wind.
For most of our voyage to Annapolis from Oriental, we had either no wind, wind directly on the nose, or no room in the channel to maneuver, but we did eventually find amenable wind and put up the sails.

And then we rounded the corner, and we were there.
Annapolis. Finally.

We settled into a slip on G Dock at Bert Jabin Yacht Yard. This place is crazy busy. They store boats on the hard, using travel lifts and huge forklifts and a mountain of jack stands. Everything you need to get work done on your boat is here; professionals ranging from gel coat repair to diesel mechanics roam freely throughout the property.

On Tuesday we were shaken to the topsides with loud noises, the Blue Angels were practicing for the Naval Academy commissioning ceremonies by doing repeated low flyovers right over our heads. It went on all day. It was so loud. And so awesome. On Thursday our friend Ceri came to visit and we went downtown to an outdoor restaurant downtown and were interrupted from our cozy conversation by a great cheer from everyone seated in the area. The Blue Angels were walking amongst us in blue coveralls with yellow stripes. We tried to follow them into the bar but the crowd swallowed them up.

Minerva needs a new fuel lift pump, we'll settle here for a month or so and swap it out. This seems like the right place to get it solved.

Let Loose From the Neuse That's Kept us Hangin' About

Then Thursday night the bike sold. And that was it. The last thing holding us on land.

Two sailors, one dog, one big sailboat, ALL IN on this new adventure together.

On Friday morning the winds started early. With our coffee cups in hand, we watched in horror as the water levels started free-falling and threatened to strand Minerva in the mud again. We abandoned our coffee, Lance fired up the motor and started removing lines. There were a few stubborn lines. Jen, a friend and fellow sailor, got a splinter in her finger while helping us free one of them, and donated a little blood to the boat. Last superstition handled: with the sea gods appeased (thanks Jen) we were on our way, off into the Neuse River...

Where we were met with strong headwinds and a nasty little 2' chop. Oh well. No sailing for us today. Good thing Lance and our favorite mechanics have been dishing up all the lovin' on Minerva, the new transmission and well-serviced engine hummed along happily. We fought our way up the angry Neuse River and into the protected waters of the ICW then onto the the Bay River, Goose Creek, the Pamlico River, and up the Pungo River to Belhaven NC. Altogether we covered 42 miles of rivers and ICW.

As we were leaving the Neuse River behind Lance sang a line from AC/DC's song Back in Black: let loose from the noose that's kept me hangin' about. And I sang it all the way to Belhaven.

For those of you that aren't from the East Coast of the USA, ICW stands for Intra Coastal Waterway. It's a series of barrier islands, lakes, and rivers that were connected by canals long ago to make one long navigable waterway connecting small villages to the sea and thus to profitable business ventures. It goes from Florida to the Chesapeake and is a great way to make relatively safe short hops without committing to the open ocean weather conditions. The government dredges it to 10' regularly but it shoals up quickly, so a sailor isn't guaranteed to find 10' even if remaining meticulously in the channel. There are several bridges and each has its own set of rules about opening. All of this requires constant research and attention. Minerva needs 6'2" of water not to scrape her belly in the mud and 55' of air not to bump her mast. We have scurfed our fair share of ICW mud, and although the bridges we have encountered thus far are all clearly marked at 65' it looks like we will crash into every one. From the deck it's absolutely terrifying to look up at the mast and the underside of bridges - one sailor told me he just doesn't look; can't look up, his heart stops every time. I laughed when he said it, now it happens to me.

We landed in Belhaven NC just ahead of a parade of thunderstorms. We dropped the new Mantus anchor in 11' of water, set it well and paid out plenty of scope. We were expecting big winds the next day it was time for it to prove its trustworthiness. I set the anchor drag alarm at 100', and mirrored the chartplotter to the ipad so I can take the anchor watch screen to bed and monitor it obsessively throughout the night.

As soon as we were anchored the first rainstorm washed over us. And rinsed our deck clean. What timely and friendly service!

Chloe hasn't embraced her lawn pee patch yet so for now we need to run her ashore for breaks. I can do this from the stand-up paddleboard on peaceful waters but I can't make headway with the dog on the board if the winds are high.

At the moment we still have two dinghies aboard, our porta-bote with an electric Torqeedo motor and the rubber inflatable that came with Minerva and a big outboard. Eventually there will likely be only one, we're not sure which setup we'll keep yet. For now we wanted to take the rubber dinghy out, since we haven't played with it much, and since it's a short ride to the town's dinghy dock the Torqeedo could use a test run too. It has been 3 years after all since it last got any real exercise, now is as good as anytime. Best to bring the oars, too, just in case.

Although the wind had already started kicking the second storm hadn't released rain yet. We landed at the dinghy dock just ahead of the second storm, and hid out from the driving rain, thunder and lightning under a storefront awning with some Adirondack chairs we snagged from the patio. The storms on the East Coast this time of year are fierce and frequent, but usually short-lived. We had time to run hurry back to Minerva before the third storm hit, and settled into our floating home to enjoy a home-cooked meal and a spectacular sunset.

As we approached Minerva floating peacefully on her anchor in the between-rain light, the river splashing onto my back as the inflatable beat into the choppy waves, it hit me hard. This is our life now. This life that we have dreamed and struggled and sacrificed so much to pursue, and this is our first night on the hook, we're really on our way to... somewhere.

We finally did it.