With new and old transmissions set side-by-side the problem was clearly visible. A missing circlip had allowed the retaining nut to loosen, driving the shaft through the cover. No wonder the transmission was running dry. And fraying its cable. And working intermittently. 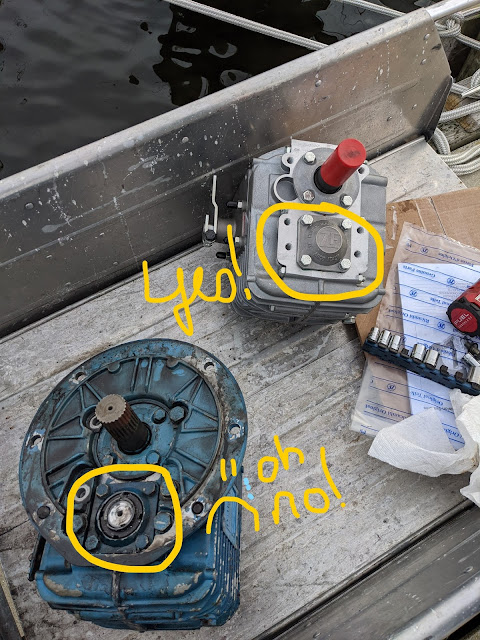 Which means all summer long, all the transmission-related things we fixed, they were all symptoms of this problem, and there was no way we could have known until it was separated from the engine. All of this drama was likely caused by the last service technician's lack of attention to a small but important 50 cent clip. Wish I knew who that guy was. I'd like to leave him a gift. From Chloe. It's already in a bag.

Well, deep breath. Onwards. The shiny new transmission hums along happily and the dead one is off to the knackers.

The two primary winches were also discovered to be dead. This was a bit of a surprise as we had them down as a Tier 3 project. We anticipated them to be like the first two we serviced, solved by simply breaking them down, scrubbing them well, and applying new grease. Alas they are frozen solid from years of neglect. So... new winches for us.

Covid part delays strike again: one winch showed up promptly and the other one is still on backorder.

This week the air conditioner finally gets installed (those parts were ordered in June... Covid delays again), and then the fuel system is being revised to give us greater control over the fuel/engine relationship. These two projects are beyond our scope and frankly we're ready to let someone else work on the boat for a while. We found a great mechanic to handle these two projects and the process will require total boat destructo. Better if we aren't underfoot.

So we moved back onto Loretta. This was the November plan all along, although we thought by now we'd have pictures and sailing stories to share from our grand NorthEast sailing tour. November's plan is to camp with friends in nearby New Bern, followed by Thanksgiving with dock neighbors, and then cruising Loretta to the Keys for December. The rough January sketch is to continue the road trip back to California to fetch our scuba and boat gear, check in with family and friends, doctors and dentists, other mandatory adulting. If the weather cooperates we'll take the bikes out for a mountaintop romp or two.

Oh. And tacos. We will definitely be stopping for New Mexico tacos along the way.

Look out America... two returning full-timers headed your way for another lap.

The Fine Art of Kedging

The forecasts threatened strong winds from the South. The transient boater had just tied up on the outside of the A dock on the South side.

As I walked by with Chloe, I paused beside his boat and started up a conversation.

"Hello, there are strong winds predicted from the South later today. Here that means the water drops away at the same time the waves roll in, and you will get blown up against the dock. You'll probably want to kedge your boat off the dock to avoid being blown up onto it, or anchoring out, or going... well, pretty much anywhere else". He wrinkled his nose at me, pursed his lips and didn't otherwise respond. He glanced up at the sky, which was calm and beautiful for the moment. I translated that as a dismissal. Huh.

Shortly later I saw another boater from A dock approach him, probably to have the same conversation. The helpful neighbor later returned with some spare fenders. Lance and I focused our attention on Minerva; double-checked all of our lines, adjusted chafe guards, and set a new spring line.

Less than an hour later the winds picked up. Minerva free-fell in her slip from +2 feet of water under the boat to 0 and then beyond. We teeter-tottered in the mud with 6 inches or more of water line exposed.

It was then that I heard some shouting. The transient boat was getting battered against the dock, exactly as predicted. One wave would pick her up and try to deposit her on the dock, then the water would disappear and she would try to wedge herself under the dock until the next wave tried to deposit her on top of it again. On one such occasion her sidestay and chain plate took some damage when she got hung up under the dock but the next wave insisted on lifting her anyway. Several boaters from A dock were trying to keep her off the dock with their feet and spare fenders, it was exactly the sort of situation that causes someone to lose fingers or a foot. The winds were getting stronger. Lance suggested I call the dock manager.

Within minutes the dockmaster and his agile crew arrived on a fast dinghy and took control of the situation. With everyone's help, the sailboat was soon safely kedged from the dock and riding the waves gracefully. The boaters of A dock breathed a collective sign of relief, reclaimed our donated lines and fenders, counted fingers and our limbs, and retreated to our own boats while rubbing sore backs.

As we were departing his boat he mentioned he had owned it for a grand total of only ten days.

Kedging from a dock is a handy thing to know. Here's how it's done (photos from the next morning when conditions were significantly calmer):

Boaters are a helpful bunch. Later discussion revealed I wasn't the only one to warn him about the coming conditions, in addition to the brief conversation I had witnessed at least four other people had told him the same thing and he failed to take action until his boat was receiving damage.

I hope that the boating community elsewhere is as tight-knit and helpful as it is in Oriental. As we begin to move around one thing is for sure: we'll be respecting the local knowledge as it is offered wherever we land. What a cool community, what a great resource.

And I'll be practicing that rolling hitch. That's a cool knot.

Posted by Rhumb Line at 9:16 AM No comments: