In June of last year, almost a full year ago, while we were busy clearing out our house and outfitting the RV, I presented Lance with a birthday card that said "this card good for flyfishing classes in the location of your choice", and a few basic flies.  It had always been a desire of his to learn to flyfish. A little later down the road he selected the LL Bean headquarters in Freeport, Maine and we decided June should be a good weather window.


Freeport is an adorable little company town, in this case the company being LL Bean and other like-minded stores. When I booked the class they directed me to the free RV parking onsite, a block away from the outlet shops and right in the middle of their adorable little downtown, a park-like location which was very convenient to shopping and dinner. It was also our first urban boondocking experience, there will be more to follow. We made friends with other RVers who parked nearby, also Californians who had been following the weather, as it turns out we'd stayed in many of the same places at the same time, and were heading to the same park near Acadia National Park next.

Lance thoroughly enjoyed his flyfishing class, and even caught a fish in the LL Bean pond. The staff was so quick about unhooking it and putting it back in the pond he didn't even get a picture of it, so  without photographic evidence to the contrary the fish gets bigger every time he tells the story. Last time I heard him tell it that trout was as big as a truck! The bottom line though, is that the moment that fish was caught, the person really hooked was Lance. We bought a flyfishing rod and he's been practicing his cast as often as he can since. I expect we will be investing in a license to cast into actual water when we get to New Hampshire.

The jump from Freeport to Trenton's Narrows Too RV Park was a short one. We selected this park because it was just on the outskirts of Acadia National Park and we asked to be tucked away in the corner. They put us in the back of the park by the dog park, and it's a pull-in site (a first for us) so all day while I work I am facing the forest and the dog park.  I received the supplies for making the window shade system, and will tackle it when I get a moment, but I'm not feeling rushed about it here since there are no prying eyes or baking sun. Our next long stop will be in Gorham NH, that seems like a good spot to take on that project.

We've spent nearly every free moment circling through Acadia National Park. Cadillac Mountain in the middle of the park has a height of 1530', and is the tallest mountain on the East Coast.  It is the first place in the continental USA to see the sun each day, and The Thing To Do is go to the mountaintop and greet the sunrise. At this latitude and this close to solstice that means sometime not long after 4am.

The majority of the park was once property owned by some Rockefellers, and they installed carriage roads along the lower elevations of the park with beautiful gatehouses. Nowadays you can walk, pedal your bike, or ride in a horse-drawn carriage on these same roads, no powered vehicles are allowed.

While driving around the Park Loop one day we came across a sign for "sand beach". Lance laughed "of course it's sand, what else would a beach be made of".... well come to find out it's the only sand beach around here for quite a long ways, the rest of them being large round rocks or jagged volcanic rock. On sunny warm days locals and tourists alike stretch out and soak it all in but nobody is swimming, the water is 40 degrees. Yipe.


We bought tickets for the local tour boat and went in search of puffins and lighthouses.  We found a lighthouse but no puffins, oh well... nature, whatareyagonnado. Bonus surprises were a pair of bald eagles, a harbor seal rookery and porpoises. The weather on the water that day was typical Maine, meaning layers are a good idea even in June. It went from coffee-cup-embracing/burrowing down into my jacket to stripping down to tee-shirt and sun-worshipping to zipping the jacket all the way back up again in the course of our two-hour tour.

Yesterday we drove without purpose around the island and discovered SouthWest Harbor and Quietside, where the pace is even more laid-back. On that side of the island most of the boats in the harbor were fishing boats and there were stacks of lobster traps everywhere, the homes are more modest and the property more sparsely populated. We drove a little further along the coastline and discovered a neat wind-swept beach, campground and picnic area and a cool lighthouse, as it turns out there are a lot of them on the island.

The RV park where we are staying belongs to a collection of Thousand Trails and Encore parks, and after careful consideration we decided to buy into the program. If we choose our landings carefully we should be able to save quite a bit of money on the next year's worth of our RV park stays. I'll keep track of how it works out and report back on that later when I have some data compiled.

Good friends recommended a family-owned private RV park in Bellingham, MA, a suburb of Boston. The park was adorable and well established. Because we booked so close to the Memorial Day weekend they put us in one of the last available spots, close to the front gate in the middle of all the action. The best part was watching the petting zoo animals frolic all day, the worst part was feeling like I was living in a fish bowl, since my office window is the front of the bus and everyone had to parade past me to get into/out of the park. That's the price we pay for waiting until the last minute to book a reservation on a holiday weekend.

Halfway through our stay I got an up-close inspection of a neighbor's MagneShade system and decided to break out the sewing machine and make a similar one myself. I'll order the parts to arrive at the next stop. This will reduce the heat/light/prying eyes coming in but not reduce our view out by much, if any. This is a worthy project that will greatly improve temperature control and give us some privacy when we are in full sun or tight quarters.


The majority of the park was covered in thick shade trees, with a pond and beautiful flowers. We hit the weather sweet spot, still mostly Spring with some rainy days which coincidentally landed on the days we'd carved out for sight seeing (see earlier blogs about embracing flexibility), and a few days which revealed some shocking heat, just enough to give a peek at what summer has in store for the region. We were grateful for our 50amp hookup and the park pool on those hot days. 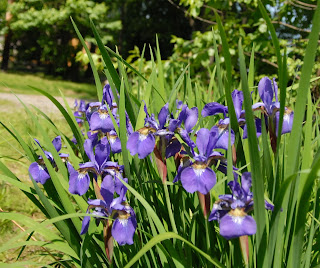 We booked a foodie tour in Boston early into our stay here. We intended to go back and follow up on some of our favorites, but lost some time to cold/rainy weather and opted to stay close and explore Bellingham's bicycle pathways when we could take advantage of the short weather windows on those days instead. On one of these  local exploring days we came across the Franklin end of the Southern New England Trunkline Trail. This is a Rails to Trails project; the train originally ran in the mid-1800s. You can still sort of make out where the little villages along the railway used to be, nowadays the path goes through peaceful suburbia and small farms.

The traffic getting into and out of Boston was fairly frightening. The on/off ramps are so short it's about impossible for anyone to merge on or off at freeway speed, and the result is a slinky-type slow-n-go which tends to jam up across all the traffic lanes. The closer you get to Boston the more intense things get, like any big city, and most of the driving in Boston is actually through a tunnel system UNDER the city; we took a big breath and got comfortable with it but many were not and there was some resulting drama. The T train does branch out into the suburbs rather nicely, I think if we come back we'll look into getting a commuter pass and skipping the freeway altogether next time.

The streets in the oldest parts of Boston are made of stone that was originally ship ballast, some dating back to almost 400 years ago. And it is still holding up nicely, all things considered.

The prevailing architecture is starting to change, as we go North we noticed a trend towards wood and less brick.  Next up, Maine.
Posted by Rhumb Line at 4:04 PM No comments: