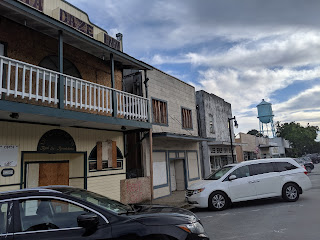 Our home base near the Kaiser Vacaville for all this foot drama has been on the Delta Loop across from Rio Vista on the Sacramento River. The closest little levee town is Isleton.

Less than a generation ago this little town was known for biker bars and crawdad festivals. Nowadays it's mostly vineyards, almond orchards, wedding venues, grazing cattle, cute little restaurants and bars, and here and there some apparently abandoned half-baked development projects. It's an easy commute from here to some good-paying jobs in the East Bay (like Antioch and Walnut Creek) and the prices are surprisingly low by California standards for waterfront property; we considered ourselves lucky to be here in this little overlooked spot of California close to everything and yet tucked away and forgotten, and we tolerated the wind which can be quite extreme (no surprises there - the windmills just west of the river are plentiful and nearly always spinning).

There's some world class fishing less than 20 feet from our rig and the chatter around the park is mostly fishing-related. Lance has had some pretty good luck when he goes out, fortunately fishing from a lawn chair with cast foot elevated fit right in with doctor's orders.

We finally got the green light to roam again. While discussing our next steps, we were both surprised to admit how much we have enjoyed riding in the bus together on these short-leash adventures. After much consideration we decided to put the Subaru up for sale and tow the Mini when the motorcycle trailer is not with us. We're planning a clockwise route for this next loop, up through Oregon and Washington to Vancouver and Victoria, then East to Glacier, Yellowstone, the Tetons, and then continuing East to the Great Lakes, destination Florida Keys by December. That's the rough sketch for now anyways.

The Ghost in the Laundry Machine


"The ghost's name is Charlotte" the bartender told me while sliding my drink across the bartop on Sunday afternoon. Her face was totally deadpan. "I have felt her presence before but this time I saw her in the corner, over there behind the pool table."

I sipped my rum & diet coke and considered her statement. She believed it to be true.

Moments before I had placed our three loads of laundry in at the laundromat next door; one coldwater wash, two warm water washes, three identical machines.  I put the quarters in at roughly the same time, the digital timer on the coldwater load read 29 minutes to go, the other two 32 each.

I sipped my rum & diet and glanced at the timer on my phone, set to countdown with the first load @ 29 minutes. When it read less than a minute to go, I left my drink with Lance and went to check on them. Now the loads read:

My first thought was... someone here is messing with me. I looked around the room; there was a lady in the corner playing some game on her phone, a scrawny young nearly-naked man sucking on a beer in some truly ratty shorts (someone waited until ALL the good stuff was dirty before going to the laundromat), and a young mother wrangling her two littles with non-stop commentary in both Spanish and English. Nobody looking shady in the corner. Hmmm. Charlotte? Now that the third load was finished spinning I loaded it onto the dryer and reset my phone timer. The remaining two washers were reading identical timers.

I wandered back to the bar next door, to Lance and a new rum & diet. The bartender was telling folks how things had been moved around behind the counter, and how her boyfriend missed an important shot at the pool table once, all attributed to the ghost Charlotte.

When my phone timer went off, I went next door. The washers now read
2  6

Totally bizarre. Charlotte has a sense of humor. Or she hates  the idea of me finishing my laundry. Or she likes to see me wearing a path between the laundromat and the bar. Or she is getting a kick out of sending me back to the bar because every time I settle back into my barstool the bartender slides a brand new tall rum & diet at me. All this laundry is making me drunk.

One thing's definitely for sure.  From here on out I am picking laundromats with bars next door. This was the absolute best time I've had doing laundry ever.


Of course the best part about this trip was getting to spend lots of time with Gramma. That might be my favorite part of this mobile lifestyle, there's time to spend where you want to spend it, and at 93 Gramma still whoops us all at dice games.
Posted by Rhumb Line at 2:04 PM 4 comments: 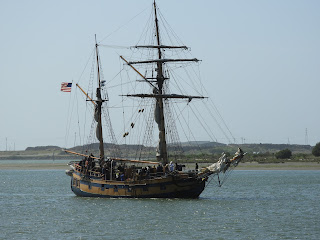 Our first Short Leash Outing was to Eureka, California in Humboldt County. Land of fog, Roosevelt elk and very, very large trees. I love this part of the world.


No trip to the region is complete without a visit to the last remaining historical cookhouse in the west - the Samoa Cookhouse - where the loggers of days gone by used to take their daily meals. The cooks decide what to prepare each day, and you sit at a long bench and they keep bringing food until you beg for mercy. The meals always start off with biscuits and gravy and this weekend's selection was french toast and sausage. The old lumber mill is long gone but the Samoa Cookhouse remains as do quite a few of the loggers' descendants who settled in the area. Many have clung to their traditional garb and it's not unusual to see extended families in matching lavalava (Samoan skirts) relaxing or playing games together in Eureka's parks on Sundays after church.

It's generally pretty cold here, this weekend it was about 60 degrees and that's generally what it's like all year around. In the summertime it's a welcome escape from the valley heat. Not many restaurants have outside dining because of the cold, though, and we struggled to find things to do with the dog. She did enjoy running on the beach at Samoa Island, all of which is dog-off-leash and also OHV friendly. We even saw one dude in a large pickup driving around on the sand with his dog running along beside. At first we thought the dog was being punished but before long we realized this was their regular exercise routine. After a few laps he was welcomed back into the pickup and hung his happy and tired head out the passenger window, tongue flapping in the breeze.

In years gone by we came to this area for the scuba diving and to freedive for abalone. This time we came here for the party; the Salt and Fog Fish Festival of course. The citizens of Eureka arrived too, decked out in their signature wild-hair, puffy coat and hemp-wearing finery to celebrate this moment of sunshine and to welcome Spring with us.


Mr. Toad's inaugural trip was successful; he followed along behind Loretta perfectly, although he's a bit heavier than the motorcycle trailer. The Blue Ox system is easy to work with and we are getting quicker with the connect/disconnect process.


Our next Short Leash Outing will be Monterey, another California favorite.
Posted by Rhumb Line at 7:51 PM 4 comments: