The World of Coke in Atlanta

Today we met some friends in Atlanta, they picked the attraction:

The World of Coke

That place is crazy. 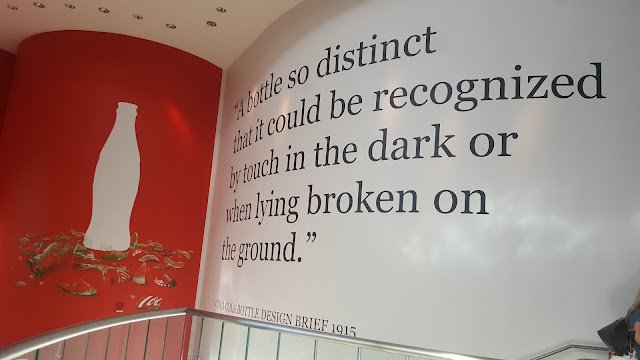 It was invented by a druggist (today's job title for the same work would be more like pharmacist) over 132 years ago, in Atlanta.
Coca Cola is a real, home-grown American company.

It's true that there is a vault where the original recipe is kept.  Well, we saw the vault anyway, who's to know if the recipe is really in it.  While we were waiting in line for something or other Lance started a rumor that the real recipe is being stored with Walt Disney's head and other national treasures, we'll see if that gains any traction.  You heard it here first, folks.

We all agreed that the ones sold in Germany are bitter. There's one that's so bad everyone kept whispering "did you try the Beverly?" and then raising their eyebrows at one another in horror. I heard someone say it tastes like aspirin - of the Do Not Chew But You Accidentally Chewed It Anyways and Now It's On Your Tongue Forever variety. With bubbles.


They have a running film clip of their commercials in assorted countries over time.  I had the "I'd like to teach the world to sing" song stuck in my head for quite a while after exiting that room. Now it's in your head, too. You're welcome.

All in all, it was a good day out with friends, and probably not a venue we would chosen on our own so I'm glad that our friends suggested it.

The traffic in Atlanta is truly disastrous. The freeways move well but the city itself is in complete disarray. There is construction everywhere ("all the time" the locals say with a sigh and an eye roll) and the construction folks seem to take great pleasure in shutting down roads and creating diabolical dead-ends. I am so thankful for GPS and map-enabled phones, or we would still be hopelessly lost somewhere in downtown Atlanta, making our 145th U-turn. We will definitely be avoiding Atlanta with the bus and trailer.
Posted by Rhumb Line at 8:07 PM 4 comments: