We were very excited about our planned stop in Boston. Our RV visit in 2018 was way too short and were excited about exploring the city more thoroughly. With a little research and some persistence I landed us a marina right in the middle of downtown, right next to the aquarium, the Greenway and just blocks from some great food.

The storm in the middle of the Atlantic had just earned a name: Henri. I watched it with mild interest, but it wasn't predicted to become much. And we were in the Northeast. After all, the reason we came here was to avoid the hurricanes of the Southeast. How ridiculously unfair would it be to get hurricaned anyways - after all the traveling we'd done to escape?

We settled into the marina and were greeted by the sounds of a sea lion barking at the aquarium. We hadn't heard that sound for so long, we immediately felt right at home. Chloe of course barked right back, a feature the neighbors surely appreciated at sunrise when they were both most active. Each time we couldn't stop laughing long enough to chastise her for it. I wonder what they were saying to each other.

Boston is a friendly city that seamlessly balances parks with city, a harbor both working and pleasurecraft populated, and architecture from four different centuries that stands in harmony together. In the '90's they demolished the elevated highway along the waterfront and dug up a tunnel to route most of the traffic through. This was known as the "Big Dig" and was recognized widely as a failure because it took significantly more time and money than planned. I'm so glad we missed the messy part, but equally glad we are here to enjoy the aftermath - a public space called "The Greenway " that was placed right on top of the tunnel and runs along the waterway for many blocks, and ties the waterfront to the financial district and Little Italy. There's always something happening on the Greenway; live music, kids playing in the fountain, a beautiful carousel, walking and bike paths, food trucks, art installations. Chloe sniffed it all, and was well walked on the Greenway.

After watching for a couple of days, it became clear that Henri was in fact going to make an appearance, so we extended our stay at the marina and prepared Minerva for the hurricane. In the end the abuse we took from Henri was less than our average daily South wind beating on the A Dock in Oriental, so we'll gleefully accept it as a win.

Posted by Rhumb Line at 7:18 AM No comments:

The voice on the radio told us to tie up to the granite wall. My stomach turned a cartwheel. We haven't had good luck tied up to walls, they tend to try to abuse Minerva. And I didn't imagine granite would be gentle to her fiberglass. 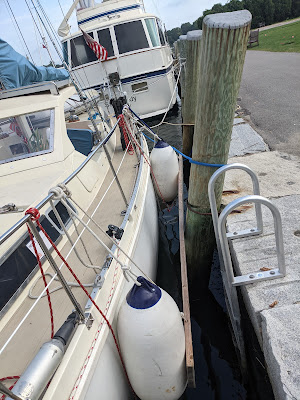 We inched slowly into the marina and discovered several dock crew standing around in helpful places. In no time at all they had Minerva spider-webbed in with a fender board between our big fenders, safe and sound from the granite wall and yet securely tied to it. We had arrived.

At the Mystic Seaport Museum and Marina the slip fees include admission to the park. Even better, we were invited to roam freely throughout the park at night after the daily guests had been ushered out. Perfect!

The first thing we tried was the infamous Mystic Pizza. Best of all, they delivered right to the boat. The next couple of days were a blur of good food, fascinating history, some basic chores in the heat, and top-notch people watching.

The marina gave us a sign to post on the window: "Private Yacht Do Not Board". And we were grateful to have it as Minerva was the very first boat people coming in from the North entrance encountered. Naturally they all assumed she was part of the exhibit and stood around to gawp at her. If they got too close or hung around too long Chloe the security dog grumbled until they moved along. We decided to give her free range of the topside during the daytime, after all she was doing important work.
The marina has a deal where you pay for four days and get the fifth one free. We tried to extend into the weekend to take advantage of this but they were sold out because of a large fleet coming in. Friday morning I was tidying up with 2 hours to go, and Lance simply commented to the dock crew how it was slack tide and how easy it would be to remove the lines and the next thing he knew they had retrieved their fender board and thrown all our lines onto the deck. Well... time to go, apparently.
This has been one of our favorite stops so far and we will definitely come back. 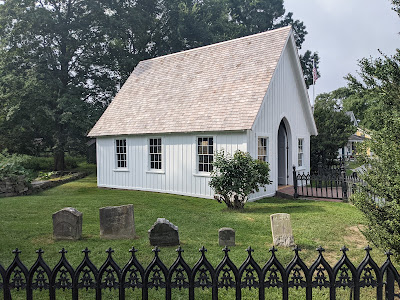 Chloe and the Cat Burglar of Connecticut

As the dinghy powered silently towards the island in complete darkness Chloe was dancing from one side of the boat to the other, leaping up on the pontoons and peering down into the inky blackness. There was just the tiniest sliver of a moon and it was doing little to clarify if our chosen landing was going to be effective.
With a sigh I glanced down at the Luci light lying deflated at my feet. Ordinarily it proudly tops our Torqeedo motor and announces to everyone that we are a dinghy under way in the dark. Tonight it wouldn't even light up. We had blown a small hole in it on a high mountain pass in the Rockies long ago, and multiple repairs had scarred it over the years but held it together, until last night's rainstorm infiltrated its lighting system, finally leaving it unable to illuminate. RIP good and faithful equipment.
Armed with the brighter-than-the-sun boat flashlight, Chloe and I ventured out for her last shore break of the night, heading for a small island close to where we had anchored Minerva. There was a house on it but it looked uninhabited at least for tonight. I reluctantly turned on the powerful boat light to examine the shoreline as we approached, the rock face was clearly too high for us to successfully land. It took a while after extinguishing the light before I could regain night vision. Damn that light is bright.
OK, redirect to landing location #2. On our way in I had noticed a pile of kayaks on a beach further away, a beach appropriate for kayaks would be a good landing for the dink. Chloe whined as I pressed the tiller and we veered away from the little island. Yes she was past due for her evening shore run. The day had not gone as expected. Our first, second, and third planned overnight landing locations stops did not pan out because the areas listed as anchorages turned out to be inhospitable for a boat of Minerva's size in such strong winds. In the end we selected a safe spot with some room to swing on the anchor, but it made for a long day and since it wasn't part of the plan we were somewhat unprepared for the evening shore break. Chloe still refuses to use her lawn patch on the boat. Which is how we got here, dinghying in the dark to an unknown shore location.
The shoreline along this part of Connecticut is mostly fancy homes. Private beaches, how nice. For someone, I suppose, but not for us. What we really needed right then was a friendly beach, a boat ramp, a dinghy dock, a public park. Any of those would do nicely.
The kayak beach was quite far still and we were heading there when the noise on the rocks alongside us changed, softened a little bit, sounded like the waves were slower somehow. I turned on the power torch for a quick moment and confirmed a rocky beach with a slow surgey inlet. The dinghy bottom is aluminum, she could take the abuse. I turned in, twisted the Torqeedo throttle to goose her into the channel then lifted the propeller out of the water just in time as the hull bounced over the first of many smooth round rocks. We had arrived. I jumped out and pulled the boat onto shore, Chloe didn't even wait until the boat stopped moving to bound out and run off to pee. My eyes were still adjusting to the darkness again and I lost sight of her fuzzy tail quickly.
"Who are you and what are you doing here?" boomed a man's voice, low and clear and way too close in the darkness, "are you trouble?"
I about jumped out of my skin, remembered the huge homes we had seen lining the coast, and concluded I must be talking to a homeowner. "Nope, just bringing the dog to shore for a quick pee break before bedtime." My announcement was met with silence. After a few beats I called for Chloe and she bounded across the rocks and into the dinghy. I pushed the little boat out with the next wave set, slipping on the slimy round rocks, jumped in, lowered the propeller just barely into the water and twisted the throttle, and away we went, ping-ponging in the surge between the rocks until we were deep enough I could put the propeller all the way down, sit properly in the boat and catch my breath. As we passed the bluff I could barely make out the outline of a person standing there, hands on hips. Still silent, but the disapproval rolling off his posture spoke volumes.
After we were safely aboard Minerva I relayed the whole story to Lance, and he pointed out that I must have looked like a thief; approaching from an unexpected direction, lights out, with a super stealthy electric motor.
Yep, that's us. Chloe and the Cat Burglar.
Posted by Rhumb Line at 5:40 PM 3 comments: