I see them at the marina. At the bar. At the local restaurants.

All around the country, they're always there.

Those boaters who never leave the dock.

I always wondered to myself...

in a rather judgey way...

What's the point of having a boat if you never leave the dock with it?

If the boat doesn't move, you don't know what's wrong with it.

Until you put her in gear.

Take her out of the slip.

Try to do actual boat stuff.

That's when you discover what is broken.

She's not really dead until you crack the seal and see for yourself.

Until then she's both alive and dead at the same time.

So for now, Minerva is running perfectly.

We're afraid to leave the dock.

Posted by Rhumb Line at 1:24 PM No comments: 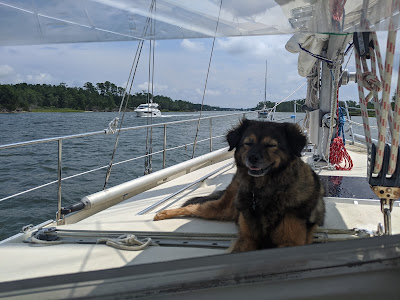 We put the finishing touches on the electrical refit and decided Minerva was done. One more test sail and then we'd finally escape North out of the hurricane zone. We were invited to tag along with Phoenix for a Cape Lookout weekend sail. We were even smug enough to consider, for a moment, leaving right from there on the outside around Cape Hatteras and up to Virginia that way.
Oh, how the smug get smote.
We followed Phoenix down Adams Creek and out into the open ocean. In Beaufort we sailed out against the incoming tide - with all our sails out on a 15 knot beam reach we inched past the channel marker buoys which were leaning hard against the current and throwing up wakes of their own. It felt a little like those nightmares where you are running as hard as you can and not going anywhere. 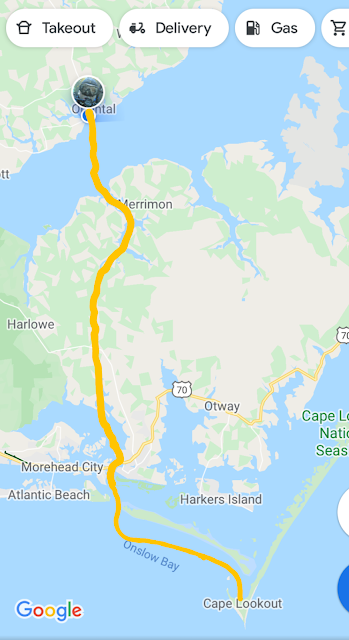 Eventually we escaped the incoming tide and Minerva realized the speed she'd been straining for. We sailed alongside the shores of the Outer Banks in rather sloppy seas. It felt good to be out in open ocean for the first time on Minerva, she handles the slop like a champ. Ahead of us, we saw the wave action rolling Phoenix around near the mouth of Cape Lookout so we made the decision to take a longer but more comfortable approach which delayed our arrival.
By the time we came around the sandbar that makes up the hook of Cape Lookout, Phoenix had long been settled on her anchor way up in the protected part of the anchorage. Just inside the hook we turned into the wind, fired up the engine, and Lance started taking down the sails while I kept her pointed into the wind. As soon as I put Minerva into gear, she died. I started her back up again, put her in gear, and she died again, and again a third time. Lance was unaware of my struggles and yelled back "hey the boat is coming around you gotta turn into the wind so I can get the sails down" to which I shouted (first a string of cursing, then) "she keeps dying". He let go of his armful of sail to check the engine compartment; I watched in horror as the depth meter read 24 feet, 20 feet, 17 feet. He still had his head in the engine compartment while I ran up and dropped the anchor. In my haste I dumped some chain on top of the anchor instead of letting it set first and then paying out the chain carefully - a rookie mistake and I know better. He didn't find anything obviously wrong with the engine - the filters looked clean and water was entering and exiting like it should. All seemed to be running well until we tried to put her in gear.
The winds were howling and we were being blown against the lee shore.
We looked hopefully for an obstruction on the propeller, alas there was nothing to cut free. Which meant we probably had a transmission problem. Not so easily solved at this remote location. I reluctantly put away the dive knives. 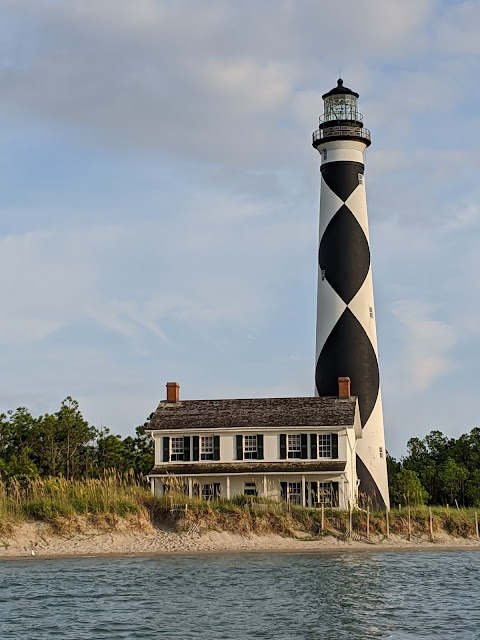 The Lighthouse at Cape Lookout
As the afternoon became night, the winds increased to a steady 40 knots. We inched towards the lee shore, in hindsight I think the chain was just freeing itself from the top of the new Mantus anchor, but at the time I was convinced we were dragging and so we set the second Fortress anchor. The shelf was disturbingly close behind us and so we took turns on anchor watch.
In the morning we hashed out our options over coffee. The Saturday morning winds were changing direction a bit too haphazardly and we were too close to the 3' shoal to try sailing off the anchors into deeper waters, and the afternoon and next two days were predicted to be the same high winds blowing us onto the lee shore, followed by flat calm on Monday. Ultimately we swallowed our pride and called TowBoat US; they agreed the best course of action was to tow us into a safer part of the anchorage closer to Phoenix for the time being rather than drag us off the lee shore after running aground later, and do the long tow on Monday when conditions were calm.
With our plan established we explored all we could between rain squalls. By Monday Lance decided rather than getting towed to a shop he wanted to return to our Oriental slip, pull the transmission and replace it himself with the help of a local mechanic in Oriental.
Our tow ride home on Monday was smooth as silk. At the end of the ride I signed a document for $0 towing fees. Yay unlimited towing. 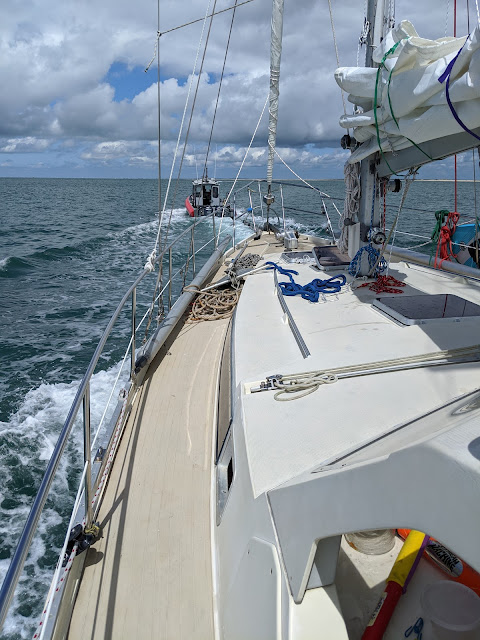 The open ocean portion of the long tow home
The mechanic gave us some good news: a whole transmission replacement wouldn't be necessary - just a cable which was obviously frayed - a readily available $30 part. We were up and running again quickly. We thought the problem was solved, so we scheduled another "last" shakedown cruise before our big escape.
The following weekend we took out a handful of friends for an afternoon sail. It was glorious... until time to put the sails away and go home. I powered her up, turned her into the wind, put her in gear, and she died. Exactly the same as the weekend before.
This time we were close to home, had a nice beam reach, and lots of able-bodied sailors aboard, so the decision to sail her into her slip was a natural one.
Now, if you've never sailed a boat into a slip, let me tell you - getting the speed juuuuuuuust right is of the utmost importance. Too fast and you'll destroy something on the boat or the dock, or someone will get hurt trying to prevent just that from happening. Too slow and you'll drift uncontrollably in the anchorage. In both cases the boat will seek out the most expensive thing to run into. Lance and I practiced this with smaller previous boats; Minerva weighs in at a beastly 16 tons.
Nevertheless, luck was with us. We landed at just the right speed, placed the lines easily, and stepped off the boat like pros. It went off perfectly, largely because the wind was just right for such a maneuver, and also because we had plenty of agile crew aboard. Despite being the only ones aboard with any experience in this maneuver (or perhaps because we were) it was only Lance and I who appeared to suffer from flop sweat. From the outside it probably looked impressive. I still shudder when I think of all the ways it could have gone wrong.
Once we'd waved our friends goodbye, we moved on to problem-solving. Clearly the transmission cable was A problem but not THE problem. More troubleshooting required. Our daily mantra.
The mechanic is a busy guy. While waiting for him to find room for us on his calendar Lance started poking around on his own and discovered some errant belts around the shaft under the engine, probably used by the last technicians to align the propeller with the engine after the last service and then forgotten, and also the transmission was empty. As in NO fluid at all empty. Lance flushed it out - thankfully discovered no glitter - and replaced it with new transmission fluid. By the time the mechanic arrived she was purring like a kitten and smoothly shifting into forward and reverse in the slip, straining against her docklines, ready to go.
With quite a bit less confidence we launched shakedown attempt #3. We joined in with 3 other boats headed to Ocracoke for the long holiday weekend. We put her in reverse, pulled out into the river and pointed into the wind. All seemed well. We motored for a while, then sailed for a while. When it became clear we were not going to make it against the contrary winds to our destination before sunset we tried to fire up the motor again. No love. Turned the key on and... no go. 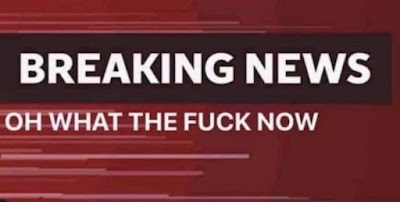 Once again Lance had his head in the engine compartment while I watched the depth gauge free fall towards zero. When I decided it was getting too shallow I turned her around, filled the sails and we surfed back to the marina on following seas and a strong tailwind. Marina staff towed us into our slip when it became clear there wasn't enough wind in the marina to land her the rest of the way on our own.
Our good friends Janet and Joe, who had been watching our inReach breakcrumbs and guessed we were in trouble when they saw us turn around, were waiting on the dock to catch us, and accompanied us for a commiserating evening of alcohol abuse.

The next time we opened the engine compartment - a broken spring glinted in the sunshine. Yep, you guessed it, its job had been "kill switch". A 25 cent part; Lance swapped it out in less than a minute. She fired right up, purred like a kitten, shifted smoothly and strained against her docklines in forward and reverse.
We're hoping the third time's a charm, and that we can escape to safety soon. Storm after storm rolls across the Atlantic, we've witnessed two of them become hurricanes, and they are likely to keep threatening us through October. I try not to lose sleep over when the big one is coming for us, and my obsession with weather websites might be bordering on excessive.
It's starting to feel like we will never leave Oriental.
I wonder if Minerva's cursed. Lance believes she just wants to show us all the areas she needs attention up front and when she is content she'll behave. He believes she's testing our worthiness. She's certainly testing the limits of my sanity.
There are worse places a person could get stuck, surely. At least the sunsets are pretty. 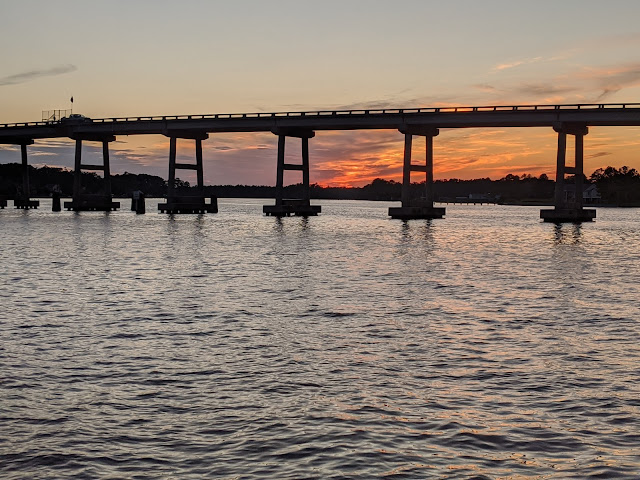 Another beautiful post-squall summer sunset behind the Oriental bridge
Posted by Rhumb Line at 1:45 PM No comments: