I found the early birds of LA, and they're garage-sale hunters

Since we moved to LA in 2004 I've enjoyed the mornings mostly to myself.  I'm an early riser an it seems most of LA is not.  Generally if I want to get something done I get to it first thing in the morning before everyone else gets moving.

Well, I finally found all the other early birds.

The garage sale was scheduled for 8am.  I thought putting the garage-sale-signage-covered cars on the street at 5:30am would give me a couple of hours to finish sorting the garage, kitchen cabinets, and displaying our goods.  I had this vision of placing the handwritten pricetags at 7:30 or so while sipping my cup of coffee and getting a chance to leisurely look it all over for the prettiest display opportunities before the sleepy residents started filtering in around 8 or 9 or so.

OMG that is so totally not what happened.

I had just come back from parking the moving van down the street when the first truckload arrived. The sun was just fully formed - must have been about 6am.  I calmly reminded them the sale started at 8am and wandered into the kitchen to resume the cabinet sorting.  I didn't lock the door behind me, they must have followed me in.  Within 10 minutes I found myself awash in strangers. Everywhere.  They were in the back bedrooms, opening closet doors, looking over my shoulder and asking questions about tupperware and mugs and handling the stuff in my "keep it" pile.

I glanced nervously outside to the garage, hoping for a little help from Lance and found him surrounded in much the same way - a tall man with a worried expression surrounded on all sides by short people with assorted brands of broken English all vying for his attention for this tool, that tool, the racks on which we intended to display it all... It was like a scene from a zombie movie right before the hero is taken down by the hordes.

Our friends showed up with their baby stuff to sell shortly after 7 and had to fight their way up the driveway.  How they managed to complete their setup amid the total chaos speak volumes about their perseverance. 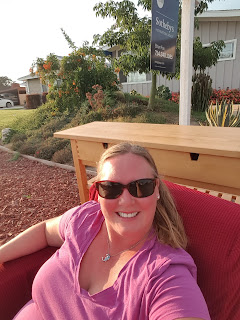 By 9:00 it started winding down.  The garage racks were gone, most of the tools, all of the big appliances. The 9-noon crowd was more along the lines of the leisurely paced group I had originally imagined, playing dress-up with the Halloween costumes before settling on a choice, picking up one treasure after another and putting them down.  We took turns manning the driveway and hitting the pool.  It was a record-breaking heat sort of day, thankfully we retrieved the beer and ice from the fridge as it was rolling out the door.

All in all we did very well.  Almost all the big ticket items sold and I only have a few loads to take to the donations center and all week to do it.  Sadly, nobody wanted to pay for my favorite chair so we pushed it to the curb where Stewie and I later enjoyed the sunset on it together; a fitting goodbye to a once-fabulous and now frumpy and clearly too-well-beloved chair.

Word to the wise for new Angelenos... I found all the early birds and they have a penchant for garage sales.  Be ready the night before.  If only I had known, we could have prepared better for the hordes.
Posted by Rhumb Line at 2:16 PM