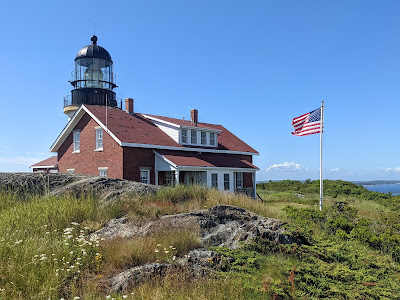 Recommissioning after the long winter took longer than planned, but in the end we got it done. All the 12v power was restored and we ended up installing a new freshwater pump, a new saltwater pump, and fortunately were able to recover the water heater and refrigerator. We rebuilt the 12v panel with modern switches and swapped out some suspicious wiring in the area of the circuit breaker panel. We put away all the tools, tidied up the boat, loaded some groceries, and considered the chart and weather.

It was about here I started having sweat-inducing nightmares about potential boat drama. Things that might pop up, things that we might not know how to deal with, just crazy worries that didn't make any sense in the glare of the morning sun. Upon reflection in the morning over coffee, I believe it to be anxiety related to once again stepping off into the unknown. A body at rest tends to stay at rest, a body in motion... well, we need to get our bodies in motion. Weird how the brain can play tricks to keep you in your comfort zone.

We were set to leave the yard on Sunday, which greeted us with gray skies of steady 20 knots with gusts to 25 knot winds and intermittent rain. We needed fuel before heading out, and there's some low tide shallow spots between Minerva's slip and the fuel dock which meant we needed to time our departure carefully. Our tide window opened at noon and every time we went to remove the lines another strong gust of wind would try to blast us into our downwind neighbor. We played this game with the slip lines for a while until we finally got the tide and gust window right, escaped and motored down to the fuel dock. And then the skies truly opened up and fat raindrops starting dumping.

All the training we did with spring lines came in handy. Our exit from the slip was not graceful but it was effective, our approach and exit from the fuel dock was much more elegant thanks to a solid spring line strategy. We tied the outside stern line of Minerva back across her backside to the dock, and Lance powered forward and bow-thrusted out and away while I paid out, pulled in, paid out and released the line. With these tricks we smoothly turned Minerva around in a space that was not much wider than her length. In a driving rain. We didn't care. We were going anyways.

Captain Fatty Goodlander's policy prior to a big journey is to go "just over there" and anchor, hang out just out of reach of land life and get settled into the new sail life rhythm while settling the boat for a journey. We decided that was good enough for us, so we motored in the cold driving rain and strong North gusts "just over there" to a quiet anchorage just North of Falmouth with protection from the winds, made some hot tea and snuggled under a blanket. It didn't matter where we were that first night - we were finally free to roam. Floating on our anchor that first night, despite the howling winds, I slept nightmare-free.

We're trying a new philosophy this year. Rather than try to fit our sailing life into a schedule, we're going to go wherever the wind is going on the day we need to leave, OR hang out and leave on a day with a favorable wind for our next intended destination. Ultimately we hope that by focusing more on the wind and less on an agenda we will sail more and motor less.

So we put our new plan in motion, and ended up sailing on a loose schedule from lonely anchorage to lonely anchorage, and on to the Seguin Lighthouse (pronounced Sah-GWEN).

Seguin Island Lighthouse was originally commissioned by George Washington himself, to protect the business interests of the Kennebec River. The lighthouse that stands today is the third one on the same piece of property, and boasts a first order Fresnel lens with a 40-mile reach. When the Coast Guard planned to decommission the lighthouse, public outcry resulted in the formation of a non-profit group who call themselves the FOSILS (Friends of Seguin Island Lighthouse), who felt strongly that the lens remain exactly in place, and to that end they became involved in arranging annual lightkeeper caretakers as well attending to the property's needs. This year's caretakers were a couple from Massachusetts by the names of Carol and Steve. They graciously showed us around the property and made us feel right at home.

If you're interested in learning more about the lighthouse, here's a link to the FOSIL page. The caretakers were connected to this seasonal opportunity through a service called caretaker.org, and it's not their first caretaking gig. Who knew interesting projects like this exist! 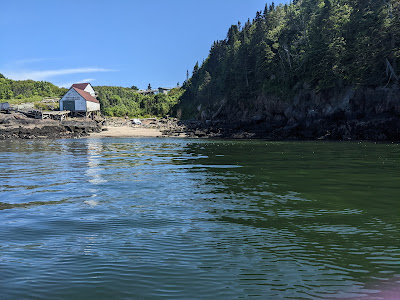 The anchorage on Seguin Island has 4 mooring balls that line the perimeter of the North Cove. None of them will allow a boat of Minerva's size to swing safely on the shifting tide, and there are signs posted not to anchor because of underwater cables. We were rightfully concerned about swinging onto the rocks, and considered our options carefully, late in the afternoon we ended up making the rather piggy decision of snagging a second mooring ball for our stern anchor. We decided if anybody came out they could raft up to us but nobody else showed so we enjoyed the cove all to ourselves, and slept soundly knowing that we wouldn't swing onto the rocks in the night.

The next morning we headed off into a windless sky to the closest place we could motor, Boothbay Harbor, which turned out to be an expensive tourist trap but at least we enjoyed a free concert from our cockpit, with the live music from the nearby patio bar reaching out us in the harbor. Just one night there set us up for a downwind run into Rockland.

The wind in Rockland always seems to howl just before the final approach into town, and so we took the sails down just before the Owls Head light and motored around the corner, carefully picking our way through the lobster pots and landed on the town dock for a couple nights of catching up with a friend, groceries and a round of laundry.

Everywhere we go in Rockland people love on Chloe. A common phrase we hear from Mainers is "she's wicked gah-juss". And so she is. This life suits her, too.