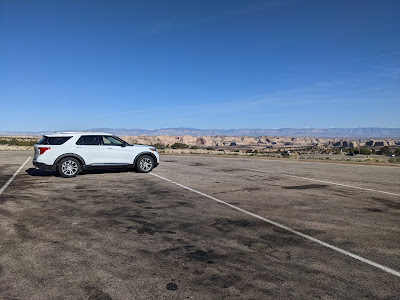 Lance showed up to pick up our rental car and they rolled this beast of an Explorer out. They told him it was the only car they had for us, despite the reservations we made weeks ago for a small SUV. Fuel mileage @19 MPG during a fuel crisis. Sigh, it's gonna be an expensive crossing. On the upside, all that stressing I did about the size and weight of the parts and other items we've been stockpiling over the last 8 months was moot. Packing was easy, and visibility was 100% out of every window.

By the way, Ford, WTF? Our RV got 10mpg, and it weighed 22,000+ lbs, it was old when we bought it, and it was also a HOUSE. Ford couldn't do better on the mpg for a large SUV in the interim 25 years since the RV was built? No wonder gas is so expensive if new vehicles coming out have fuel demands like this.

But I digress. We loaded up the giant SUV and rolled out.

We took the advice of family and friends and crossed Nevada on Highway 50. It was a beautiful drive full of old mining towns, breathtaking valleys and a national park called The Great Basin, which we flew past this time but will come back and explore some other day. For our first midday break we took a walk through some petroglyphs, and ultimately landed in Salina Utah, our longest drive day ever at 657 miles.

Bright and early the next morning we rolled out for the Denver suburbs, eager to make in time for a birthday party date with Victoria, who turned 7. After that we were able to slow our roll quite a bit.

West Kansas had some crazy winds, like it usually does this time of year. We fought the wind and landed in time for BBQ at Arthur Bryant's, as recommended by our friend Ceri, a Kansas City native. We stuffed our faces with great BBQ and passed out in a hotel not long afterwards. Of all the driving we do, fighting the wind takes the most out of us.

From there we continued North and East on to see friends in the farmlands of Michigan close to Port Huron. They put us up in their swanky 5th wheel and took us out to see the beautiful town of Port Huron, from which the Mackinac Race departs annually in July.

Then we got a picture from the yard. Minerva had splashed early. The rest of our journey was rearranged to route us directly to the boat. Our new direct path took us right through Canada, entering at Port Huron and exiting into the North East corner of Vermont.

Vermont is always beautiful, and somehow we always are rushing across it. Someday I will come back and explore it more slowly. 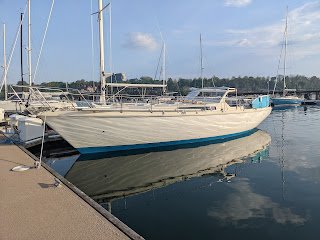 We arrived to Portland Maine on a Saturday, four days ahead of our projected arrival date. Total miles 3600. Minerva was completely torn apart still, and mastless.

The boat is a mess. There's no water, no water heater, the 12v isn't working consistently so there's no fridge, no interior lights, and no control panels. Everything that normally lives in the topside lockers alongside the engine compartment is stacked in the salon, so there's no access to the galley and nowhere to sit. The only space that wasn't torn up or piled high and deep was the master cabin. That's one space I can control, so I started there. Out came the bedding I had washed and sealed in watertight bags before leaving, I made the bed and settled our shoes, clothing and laundry. We pulled out our solar lights and an ipad and settled in to bed for an early night with some YouTube and snacks in lieu of dinner.

The yard tells us they are short-handed. They've got two out on Covid and a third stepped on a nail last week and is home recovering. So it'll take them a while to re-commission us.

By day 4 I had a little meltdown because of the general cluttered mess. There was nowhere to sit down and so I'd been carrying my laptop to the clubhouse to work, which is a rather social place and therefore not conducive to focus on the client work that was stacking up. The next morning we rearranged the pile so there was seating to work in the salon and access to the stove and sink. This meant that I could work on the boat and we could prepare simple meals until the pump access was no longer an issue and the stuff could be moved to its proper place and out of the salon. The yard crew never showed up to re-commission us, so we started working through the systems one at a time on our own. Total things discovered so far as non-functional, victims of the winter and/or shop projects:

Once the first three items are resolved we can put all the stuff back in the locker and return our salon to an orderly state, so those top three are taking precedence. After the salon is sorted we can do a big provisioning run and fully engage the rest of our galley. Between now and then it will be simple meals since we can't access all our food compartments, and because the refrigerator behavior is inconsistent (it runs on 12v).

On Thursday the riggers fetched Minerva and put her mast on. It was really something to see, it's all been documented here. The repair we ordered last September to the main halyard has not been completed, and so we can't mount our sails yet, that will have to wait. We are also hoping the shop comes out to finish their electrical work in the engine compartment so that Lance doesn't have to jump into the middle of their project, but we'll do it if we must after the first three items are resolved. After all, there are puffins to see.

On Friday we returned the rental car. Without access to the lockers, the remaining gear schlepped out from California ended up in the vee berth on top of the sails for sorting later.

It's funny to us, when we visit non-sailors they ask what we do all day. Well... this. This is what we do. Fix, sort and clean. Home sweet floating home.