Glacier National Park with No Reservations

"You'll never get in!!!!" said everyone we talked to.
Literally every. single. person. we met.
"It's high tourist season you know..."

We were already plugged in at a great 50amp spot in Kalispell, MT but we were determined to figure out a way to stay inside Glacier National Park for the full experience, despite the fact that it's mid-August and we had no reservations. Brimming with overconfidence, Lance and Chloe set out in the Mini on Thursday morning to try to nab us a spot while I finished my morning work. It wasn't long before he called victorious, and waited in our spot for me to bring Loretta. It's good that he stayed to defend our space, because not long after he dropped our cash and registration envelope in the collection box some random dude in a red SUV showed up and tried to steal it. Fortunately, stubborn husband prevailed and by Thursday afternoon we were enjoying our lakeside spot in Glacier National Park, in spite of all the naysayers.
Here's our secret weapon: Apgar.

Apgar Campground is first-come, first-served; no reservations accepted at all. It's the first campground from the West entrance of the park on Lake McDonald - only $20/night but no hookups whatsoever. On the way in grab one of their envelopes and fill it out. When you find your space, plant yourself in it, tear the tag off the envelope and attach it to the stick with your campsite number, stuff $20/night cash in the envelope in the ranger's collection box. Simple.

I heard there's a credit card option but we didn't test the theory.

We stayed at Apgar for four nights, and I noticed that there's an early batch  of campers that leaves just before 8am, and it takes a while for their spots to fill in. Another batch of folks leave around 10 and those fill faster, by 2:00 every single spot was filled and there were rangers turning would-be campers away at the entrance. The Apgar Visitor Center is right next door and has large RV parking for short spells, a solid strategy would be to get there at daybreak, lurk and lap, repeat as necessary.

The weather was wildly variable, and the mood of the mountains changed significantly depending on the temperature and skies (the primary reason we wanted to stay in the park - to get the best photograph opportunities). On our first lap along the Going to the Sun Road it was overcast and brooding, an overwhelmingly awesome but photographically flat grey experience. The next day it stormed all day - we comfortably sipped coffee next to the propane heater while we worked on a supersize puzzle and watched the sad tent campers next to us hurriedly pack their soggy camp and flee; on the glacier mountaintops above us it snowed. 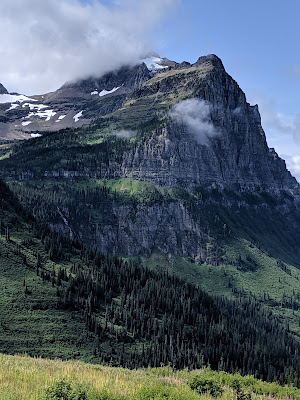 The next day gave us fluffy patches of clouds and stunning light that revealed fresh snow, the second lap across the Going to the Sun Road made for significantly more dramatic photos. It's good that we stayed to experience some of the mountain's moody range. 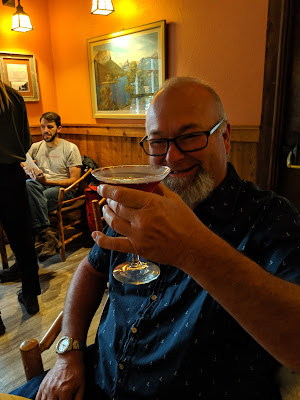 The Lodge at Lake McDonald is pretty at night and we had high hopes for a fabulous dining experience but waited over an hour to be seated, then were disappointed by the saddest, thinnest, most tasteless and also offensively overpriced steak I have ever had. The building is fabulous, though, and the salads we saw folks receiving in the bar looked amazing (I think the bar and restaurant share the same menu), I'd recommend skipping steaks and also the Fireside Dining Room altogether and eating a salad in the bar. We had plenty of time while waiting for our table to decipher the petroglyph lanterns in the lodge. We call this one "dude went exploring and the first dude he met was shy. Then he was chased by a unicorn and helped a teenage octopus with his croquet strategy. Then he narrowly escaped being eaten by colorful sharks and stabbed a stranger".

Late in the day before we were supposed to leave we discovered a bicycle path, and so opted to stay an extra day so we could fully explore it.


Next stop: Yellowstone. On our way Loretta's front right tire made a horrendous noise so we pulled in to a popular big rig stop called "Woody's" where there was plenty of parking, fuel and food and most importantly cell service to make our second phone call to Coach Net, then booked our first Air BnB in BigFork MT to wait on repairs. The plan was to sort through the Glacier pictures while we waited for repairs, but failed to take into account that the majority of them were already downloaded to the computer on Loretta which is now at the shop so that will have to wait. All the pictures you see on this blog came from my Pixel 3 camera phone, a surprisingly good little camera for a phone.

The latest mechanic's update suggests we might be rolling again in a few days. We'll post the rest of the Glacier shots down the road.
Posted by Rhumb Line at 9:23 AM