The mechanics were finally ready to release Loretta, it was time to fly to Albuquerque and pick her up. Lance couldn't go - he's meeting a new foot surgeon - so my Mom volunteered to ride shotgun.


While waiting in the Cummins guest lounge for the final paperwork to be drawn up, we anxiously watched the weather news - a big storm was bearing down on Albuquerque and promising epic snow. We fidgeted with our luggage and passed worried looks to one another, the other folks in the waiting room looked like they were wilting, they'd been there long enough to lose faith. Their dog lay farting and snoring on the floor at their feet while they recounted their long tale of repair shop woe. When I couldn't stand the wait any longer I went hunting down the necessary paperwork to wrap things up so we could flee.

Shortly thereafter we were rolling with haste, up the mountain and away from the approaching wall of black storm clouds as quickly as possible, wallet still whimpering from Loretta's 7-page long repair bill.
Destination: Roswell, New Mexico.

This town has embraced all things alien. The street lamps have painted eyes on them, currently decorated for Christmas with little red bow ties and Santa hats. Many storefronts hosted chainsaw carvings of aliens, and even the City Hall has green tiles on its domed roof. 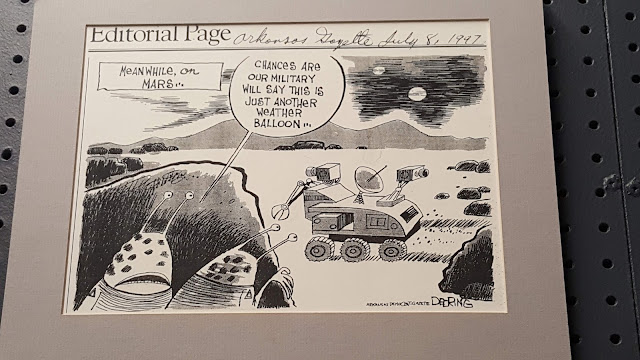 The winds are predicted to start slowing down soon, we'll make a short jump to Carlsbad Caverns tomorrow, and start making our way West as good weather windows appear.