White Mountains, New Hampshire - Proud Record Holder of the Worst Weather in the World, and Probably the Worst Internet Access, too 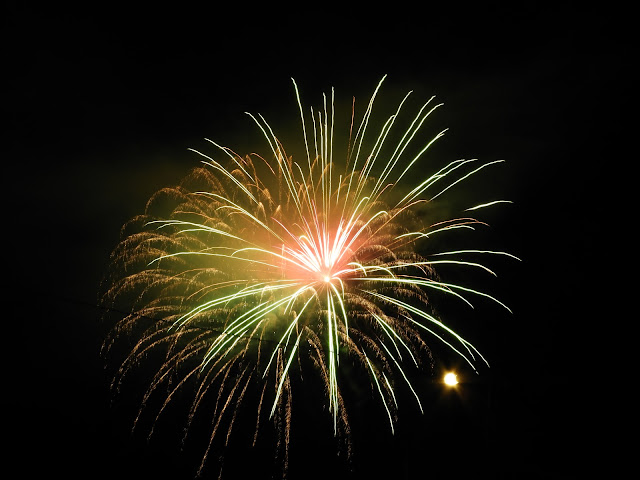 We heard some of the best fireworks on the East Coast could be found in Gorham, New Hampshire. It's at the foot of the White Mountains, a motorcycle mecca, so that works for us.

First on the to-do list, pick a spot with decent cell coverage so I can work. Tricky, this close to the mountain.  Sprint reported no coverage whatsoever and AT&T admitted theirs was spotty, but Verizon's map reported excellent coverage at White Birches campground just outside of town so I booked the site. In reality the coverage was dismal; slow when we could get it at all, and randomly it would shut off and on throughout the workday. We called Verizon to find out why the website and reality were so maligned and they sent someone out to check it, and confirmed it was "suboptimal" but offered no excuse for it or any hope that it would get better.  Now I distrust Verizon's coverage maps.

Here are the actual speed tests: 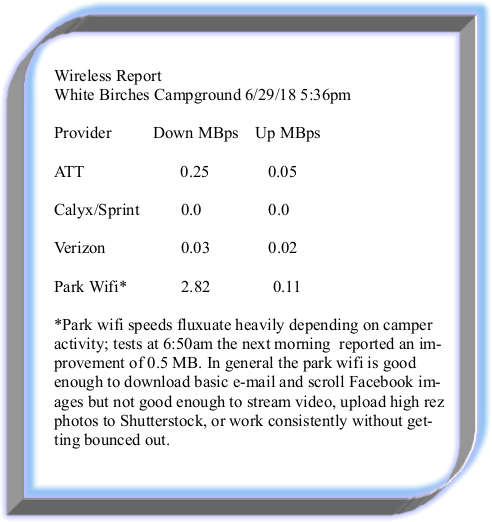 The strategy I ended up developing was to use the park Wi-Fi when the other campground guests were sleeping, and otherwise work at the Gorham City Library where they graciously allowed me to take over a quiet corner and work unmolested on their super-fast internet (it's important to note here, if this is a lifestyle you are considering, that a good VPN is mandatory to keep your data safe from prying eyes). And undoubtedly there's nothing quite like spending time at a library to show you a good cross-section of the local population.

Anyways, getting back to Gorham...
The fireworks were indeed pretty awesome. The town celebrations lasted a full 6 days, complete with a traveling carnival and live music.

The centerpiece of the White Mountains National Forest is Mount Washington, proud record holder of the world's highest winds @231 mph. There are earnest meteorology students here 24/7 - this is the spot where three major storm patterns regularly converge. Even on our tour day in early July, when the foot of the mountain was a balmy and calm 65, the top of the mountain was a bone-chilling 29 degrees with winds gusting to 40mph. There were sobering cairns marking spots where hikers had died over the years, mostly due to hypothermia, one less than two hundred yards from the hotel at the summit.


We took the easy route and rode the Cog Mountain Railway to the mountaintop. At one point the grade is just over 37 degrees. It took us an hour to reach the top.


The motorcycle roads of the White Mountains are epic, but most of the bikes we see are Harleys or heavy cruisers. We'll do the cruiser roads too, but in the meantime I also received some off road route suggestions that are begging for further investigation. Speed limits are nearly impossible to comply with in this area so we'll have to be especially wary.
Posted by Rhumb Line at 2:00 PM