The First Flight and the Lost Colony

We're in Bellhaven, North Carolina, and yesterday we set out for Kitty Hawk.  On our way across the island of Roanoke we stumbled across some signage about the Lost Colony.  Long story short: these were settlers in 1585 who completely disappeared and it's still a mystery what happened to them. It's an interesting Wikipedia read.  Subsequent investigations, up to and including DNA tracing as recent as 2007 remain inconclusive. Native populations almost certainly had something to do with their disappearance; but I also wonder with all the bugs, heat, cold, and constant dampness around here if weather, hunger and diseases their bodies weren't equipped to handle had something to do with their final fate, too.

Well, it seemed unlikely we were going to solve this mystery right then, so on to Kitty Hawk.  Lance brought his drone and we had this grand idea of shooting flying film in the exact same path that the Wright Brothers first flew.  Well, as it turns out there is a small airport runway just a couple hundred of yards off from the original flight path, with active planes all day, so no drone flying for us. Sorry, folks.

The takeaway is this: these were two brothers that were determined to fly, and they persevered until they did it.  They schlepped their gliders again and again up a significant sand dune (it is doubtful this part could have been done without the help of volunteers from the lifesaving squad of nearby Nags Head beach). Repeatedly they glided off the sand dune to crash, tweak their design, carry it all up to the top, crash and tweak and do it all over again. Day after day, month after month.  Eventually they developed a design that worked and on December 17, 1903 on an extremely cold day, they managed to fly an engine-pushed "flyer" from flat ground for 12 whole seconds just a few feet off the deck, then a little further and then a little further.

Fortunately for us, Orville Wright was an avid photographer.  So all the aspects of their journey are well-recorded. Using these photographs, the National Park was able to reconstruct their living space, work quarters and the exact location of the original flights, and a sculptor was able to recreate the exact moment of the first flight, in full-size metal on the backside of the memorial hill.

First Flight is a significant point in American history and the Wright Brothers National Memorial atop the historical sand dune (now covered in grasses to preserve the hill and support the monument) was definitely worth the hike to the top.  I'm so glad they graced it with a sidewalk so we didn't have to struggle up the sand to the top, and the only thing we had to carry up there was the camera. 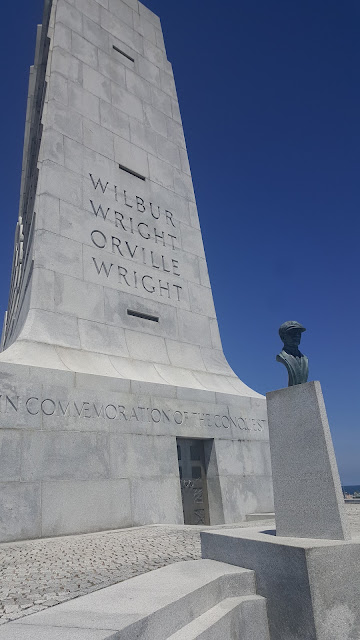